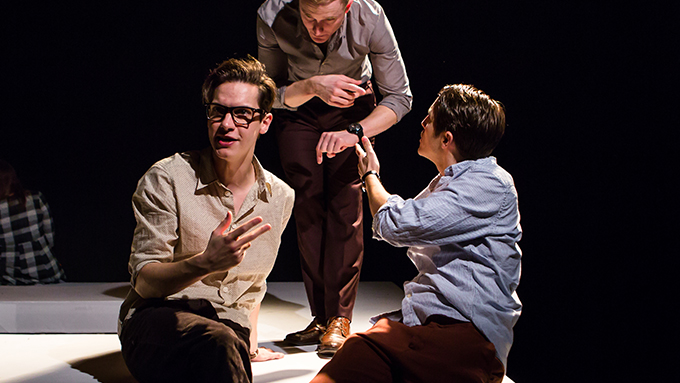 London’s railways stations are, for the most part, architectural wonders (I’ll gloss over Euston although they have just made the toilets free so it can’t be all bad). The rival Victorian railway companies came up with some absolute gems. Ornate ironwork, magnificent glass roofs, good solid brickwork and, in many cases, amazing underground vaults.
For a long time, a lot of those vaults were largely hidden from view to modern passengers. But then the engineers of today realised that they could be very useful. St Pancras led the way by building the Eurostar terminal in the vaults underneath the platforms. London Bridge has copied that, with their vaults magically adding loads of space to what was once a truly awful station.
Waterloo, the busiest station of them all, also benefits from lovely vaults. So far they have not been commandeered into service as extra bits of the main station. Instead, they have gained a use for something wonderful. Theatre.
Fairly well hidden from view, these vaults have given rise to an annual underground theatre festival, handily called Vault Festival. Starting in 2012 (oh what a year that was compared to now) the Vault Festival has hosted all manner of different art events mainly underneath Waterloo and sometimes extending out into the local neighborhood.
If you know the area, you may remember a long pedestrian tunnel along Leake Street. The whole placed is covered in graffiti, indeed you can usually watch live graffiti spraying most evenings. Hidden off the tunnel are many of the performance spaces (there’s also lots of bars and food options if that’s more your thing).
At the very far end of one of those vaults, after a walk past various revelers and eaters, is a great little space called Crescent. This space has hosted plenty of different shows during the festival and the big closing number is a production of The Talented Mr. Ripley put together by The Faction theatre team.
Most people reading this have probably seen the 1999 film version with Matt Damon’s nerdy sociopath falling in love with Jude Law while Philip Seymour Hoffman gets suspicious about the whole business. Some of us will have read the original Patricia Highsmith novel, one of five she wrote about Mr. Ripley and lengths he would go to get what he wanted.
It’s surprising in a way that a stage version hasn’t had a bigger West End or Broadway outing. Mr. Ripley has got all the hallmarks of a successful show and The Faction have done well to get the rights to stage this show in this space. Ripley on stage is probably a scarier proposition than on film. He can pop up out of the dark corners and his sheer awful behavior is probably even more shocking at close quarters.
The Faction has worked wonders to get such a cinematic show into such a small space. They’ve also got the show down to a tight ninety minutes (take note West End producers). Clever lighting and staging help make the best use of the space, and the performers know exactly what they are doing. I hear there are plans to tour this production and it certainly deserves to get another run outside The Vaults.
Vault Festival 2019 ends on St Patrick’s Day but I’ll be looking out for future performances under the arches. And if you don’t like the show you see, there’s always the railways architecture to enjoy…
The Talented Mr Ripley was on until 17 March https://vaultfestival.com/whats-on/the-talented-mr-ripley/