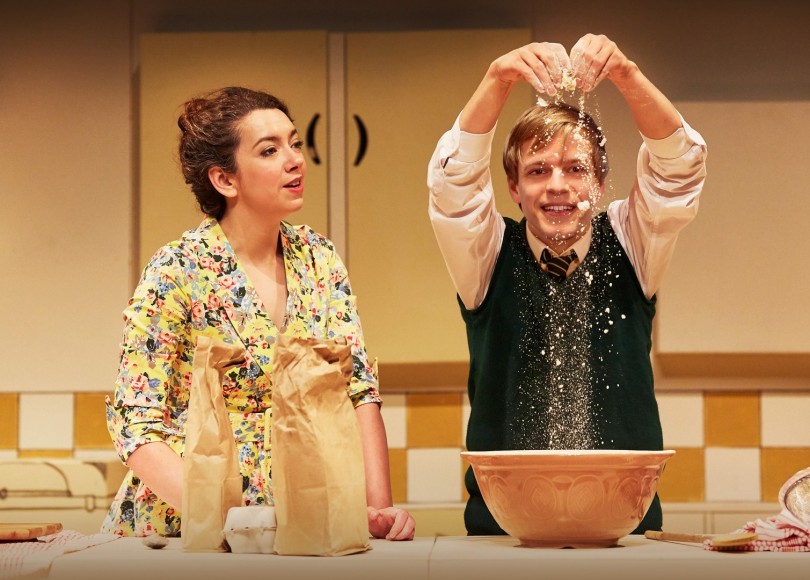 For reasons that I cannot explain I haven’t been to The Other Palace since Andrew Lloyd Webber took over St James’s Theatre, renamed it and then planned on making it the home of emerging British musicals.

The home of British musicals thing didn’t last too long with Paul Taylor-Mills stepping down as Artistic Director and Chris Harper of Elliott and Harper (Company) coming in as Director of Programming. Whilst The Other Palace still wants to workshop new musicals it is clear that for a theatre to get in a range of audiences it needs a range of productions.

Toast, after Edinburgh and The Lowry residencies, comes to London. Nigel Slater’s memoir of his childhood was adapted for television by Lee Hall in 2010 with an all-star cast and this stage adaptation makes me wonder why it wasn’t done sooner. It is a deeply moving play that isn’t afraid to find the humour in Slater’s tragedy. Toast looks at Slater’s relationship not only with his family but with food.

Giles Cooper stars as Slater from 9-17 years old, a young boy obsessed with Cooking in Colour and baking jam tarts. Cooper is fantastic as Slater, a well-known figure, and doesn’t descend into impersonation but he gets Slater’s mannerisms, his gentle approach and the guilt he feels, for his mother’s death and for his difficult relationship with his father. Lizzie Muncey as his mother and later Doreen, his boss at a hotel, provides a warm and funny performance as a woman who acts as a buffer between her son and his father played by Stephen Ventura. Dad is a man who attributes gender to sweets and reluctantly allows his son to buy fairy drops on his birthday. When his mum dies of severe asthma it is clear she protected him from a lot as his father bullies him into eating eggs and loses his temper frequently, but in this adaptation Henry Fillox-Bennett isn’t afraid to show that Mum was as much a snob and neurotic as dad.

I think one of the many highlights was the arrival of Marie Lawrence as Joan, a brash Wolverhampton woman who arrives as the family cleaner and ends up Nigel’s stepmother. He understandably rejects her as his new mother but her role as his baking rival provides much of the plays humour, as he reluctantly concedes defeat to her lemon meringue pie. There is also a fantastic supporting performance from Jake Ferretti as a various characters, my favourite was his stint as Nigel’s childhood friend.

It is just such a lovely adaptation and despite the sad story of Slater’s childhood I really enjoyed myself, aided by some edible treats such as sweets, lemon meringue pie and a quite disgusting approach to eating walnut whip. The whole cast really shine as an ensemble and it made me appreciate Slater a food writer, a man who appreciates what comfort food can bring rather than just being a means to an end.

Do not miss this, you’ll be craving lemon meringue pie for days afterwards.

Nigel Slater’s Toast is booking until 3 August 2019. Tickets from £15 https://lwtheatres.co.uk/whats-on/nigel-slaters-toast/