In the original Shakespeare play, Othello is a highly-respected soldier, famous for his success in campaigns, yet still struggling to be accepted by the snobbish Venetian society because of his skin colour. What would he be if he lived in present-day London? Perhaps an immigrant boxer, attempting to find a sense of community at a local gym? A boxing ring is the setting for Intermission Company’s reimagined Othello, and it works extremely well, giving the story a new sense of urgency as well as making the audience feel they are part of the show.

The Intermission Youth Centre was established in 2008 and works with young people from deprived backgrounds across London, particularly youths who are at risk of offending or who live in challenging environments. This gives the production a raw edge and a feeling of authenticity that few other companies can match.

In this all-black cast, Othello and Iago are sparring partners at a local boxing gym filled to the brim with young people who are looking for an alternative to drugs and gang violence. This is a backdrop that looks and feels very familiar to Londoners, and the cast mix Shakespeare’s words with street slang with complete insouciance. The juxtaposition of modern and classical innuendos are often hilarious (Desdemona and Othello are seen together in Nando’s, a sure sign that there must be something going on between them), but there is a sense of far too plausible tragic inevitability as well about the story.

Othello is the big star of the gym, training for a championship. Kwame Reed plays him as a physically impressive, fundamentally serious young man, perhaps over-earnest and too intense, which lead to his downfall. By contrast, Iago (Baba Oyejide) is tall, thin, deliciously devious and full of nervous energy. A born intriguer, he is goaded on in his evil plans by the ringside referee, a mysterious observer whom no one else other than Iago (and, at a later point, Othello) seems to see. This referee (played by Danielle Adegoke) embodies the interior monologues that the two main characters use, but there is nothing fair or just about her interventions. She is the devil on your shoulder rather than the voice of reason. 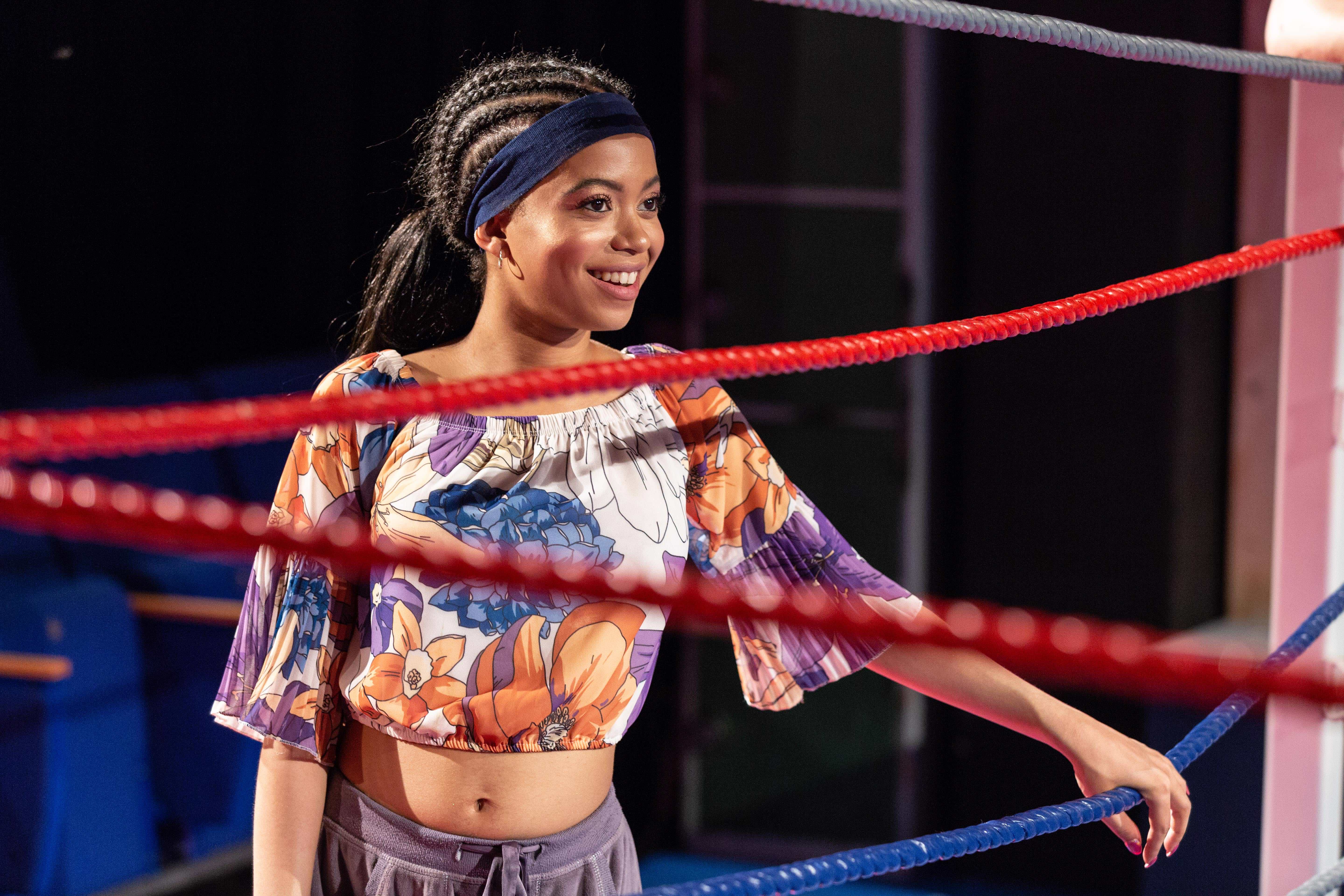 The contemporary setting leads to some ingenious changes in the story: Desdemona’s handkerchief becomes a ring; the disparaging boasts that Cassio makes about Bianca become text messages that Othello wrongly assumes are from Desdemona; Iago plants drugs on Cassio to make Othello fall out with his second, Cassio and Rico (Rigoberto) engage in a rap battle as well as fisticuffs and so on. None of these changes felt forced and they certainly made the story come alive to a younger audience.

While I would have liked the female characters to have more lines and less of a desire to please their men, they do display a couple of fiery moments when they band up and dare to contradict the menfolk. Above all, there is no weak link in this dynamic, enthusiastic cast. The two leads are superb, Desdemona (Hoda Bentaher) manages to tread that fine line between being good without becoming a doormat, while Cassio is played as a wide-eyed and bushy-tailed youth eager to escape his past by Micah Loubon. Iain Gordon’s Rico with his naive retorts often got the biggest laughs of the evening, and even the smaller parts are cleverly devised and interpreted with gusto: the selfie-obsessed Bianca, the wise Duke (in this instance the gym owner and father of Desdemona) and fiery Brabantio (who becomes Desdemona’s brother here and seems determined to protect her honour at all costs).

While there were plenty of laughs before the interval, the mood grew increasingly sombre toward the end and the notorious strangling scene was almost unbearably visceral. Go there, take your teenagers with you (or borrow some if you don’t have any). Be prepared to be enchanted, provoked, and emotionally drained. This passionate interpretation of Othello feels so right and so believable.

Othello Remixed, performed by the Intermission Theatre Company, directed by Darren Raymond, will be running until the 14th of July at the Omnibus Theatre in Clapham. https://www.omnibus-clapham.org/othello-remixed/#BookNow