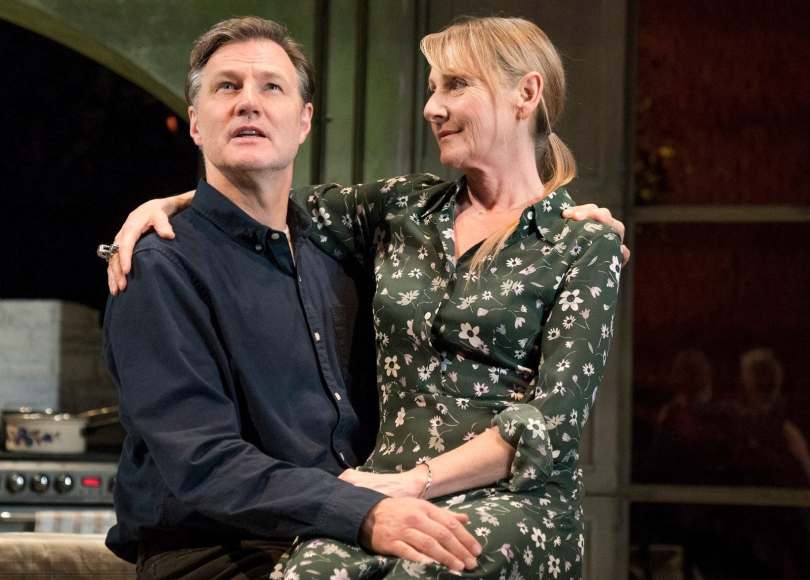 Warning: This review discusses the plot, including the ending. Do not read on unless you’ve seen The End of History or have no intension of doing so.

When we think of the “end of history” – the title of Jack Thorne’s deceptive new play, we recall that period from the collapse of the Soviet Union in 1991 to September 11th 2001, when politics seemed to be on sabbatical. The battle of ideas – the clash between free market economics with its attendant individualism, and socialism had been won. The old left had been repurposed to fit the Thatcherite consensus, styled as “social democracy”, which to you and me means Conservativism with a few moderating, conscience placating bolt-ons.

Not for nothing does Thorne’s play begin on the cusp of New Labour’s landslide and end, head bowed, solemn, with the assembled Generation X-ers – the children of ‘60’s and ‘70’s radicals, washed out and alone. It’s a play about false consciousness – the naturalisation of militant individualism being played out to its logical, bittersweet conclusion.

As it begins, in 1997 natch, we have something like an extended episode of a Carla Lane sitcom – the funny but embarrassing old lefties agitating their whip-smart but unhappy kids. There’s a lot of warmth in the room and plenty of penetrating wit, but also tangible regret and frustration that the dysfunctional brood has no purpose and therefore no drive.

They’re the limits to a market-driven consciousness personified. The tragedy, for those in the audience mindful of where the country’s heading and the misery to come, is Sal and David’s failure to pass on a political inheritance – a conceit later literalised with a decision not to share the baby boomer material spoils that have replaced activism as binding obsessions in the minds of their wayward offspring.

The End of History has a nuanced but defined political underpinning. It’s an allegory that links the death of Blairite optimism and the re-emergence, or rather entrenchment, of Thatcherism to the death of the family. Every generation has to fight the same battles, said Tony Benn, but Sal and David’s kids have bought the lie that the battle was fought and won some time ago and they’re on the winning side. This ignorance of the past – which Thorne moves from the abstract to the real in David’s eulogy for his wife – the monologue that closes the play – in which the kids learn new details of their mother’s political journey, costs them.

Carl marries aspirational wealth in the form of “posh girlfriend” Harriet, only to see the initial naivety that characterises the relationship (and her) transmogrify into hardened, embittered disappointment and the loss of his own family. The values Harriet represents see her become confident, cold and demanding as the play progresses. Cambridge graduate Polly pays the price for literally getting into bed with mercenary, selfish lawyers – a failure to forge a good relationship of her own. Instead she plays second fiddle to someone’s wife, eventually becoming a seedy lust object for an unseen early dick pic merchant. Tom – a feckless and hedonistic teen, grows up to be a miserable, lonely, rootless adult. When he learns he’s not inheriting the family estate he hasn’t earnt and didn’t pay for, he attempts suicide.

The death of the mother, twenty years on from Blair’s victory, and 2 years into Corbynism – though the play suggests parental sympathies remain with the pragmatists (Jess Phillips), prompts a recalibration of values and reflection on the failed family by the desolate offspring.

The end allows for retrospective reappraisal of the story, and contrasts the dead mother’s principled youth and family orientated adulthood with her Blairite kids. Many older audience members will see themselves in the idealists and, tragically, many younger patrons will relate to the washed out Generation X-ers. Thorn’s play manages to prompt that reflection without being overly didactic – content, like the Quaker-inspired draft eulogy he ends on, to let the lives of the characters speak for themselves.