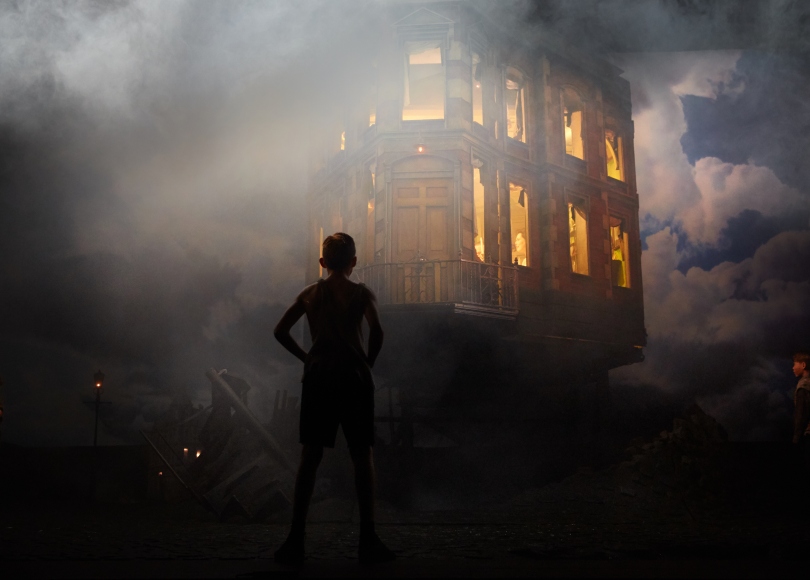 J.B. Priestley’s old standard turns up unannounced in Bromley (not to be confused with the play’s setting of Brumley), and it’s a polished and handsomely mounted production to boot. The Birling house, in keeping with their position in the Edwardian pecking order, is precariously elevated, its facade easily pulled back and exposed, its interior narrow and small like the minds that reside therein, self-congratulatory and decadent, until the titular investigator approaches from the cobbled street beyond.

It may appear mannered and overly didactic to some members of a modern audience, but An Inspector Calls remains depressingly relevant on account of being a weapons grade piece of social commentary; Inspector Goole (autocorrects to Inspector Google) an avenging spectre from a more egalitarian and socially cohesive plain.

That he’s a working class Scot with a no nonsense manner, and righteous in the best Presbyterian tradition, serves as a sharp contrast with the well-to-do capitalist clan who’ve made their money on the backs on the working poor. As they gather to celebrate the engagement of daughter Shelia to another empire builder, with the hereditary Birling waiting in the wings – a lofty and indulged son that exasperates his self-made Dad, it’s like looking at a snapshot of everything rotten with society then and now; a system driven by greed, preferment and self-interest.

Goole picks this apart in a series of earnest exchanges with the hypocritical brood and their role in the destruction of a fired factory worker whose lot was made progressively worse by each family member. Damned back luck that she managed to find herself on the receiving end of an uncoordinated assault by the same family, but the inspector’s only got time and stage space to call at one house, so everyone, from the factory owning father to the pampered daughter, via the matriarch playing God using the respectable front of a charitable trust for fallen women, plays their part. A girl who had the affront to ask for better pay is condemned to a miserable life of penury, prostitution and finally, suicidal despair.

Priestley’s radiating anger at what he saw as gross inequality and the failure of the well off to support the less fortunate (for accidents of birth and luck have always been decisive), can still be felt in the stalls. Anyone who’s wasted their time and labour working for another bag of blood and bones with a title and sense of entitlement will feel it in their gut, lamenting we’ve made so little progress in the 74 years since the play was first performed.

On the night I attended an excellent cast held an initially unruly audience, a third of which were teen school children inspecting an English set text. They gasped, whooped and laughed in all the right places (and some of the wrong places), sold on the play’s emotional underpinning, moral lesson and social conscience. That, Director Stephen Daldry and the looming presence of the dead playwright would surely agree, is job done.