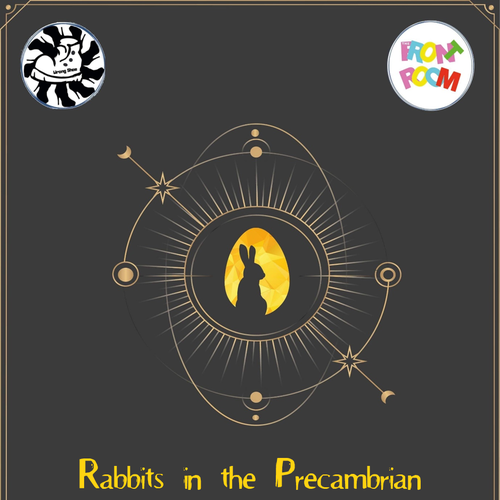 Do you fear death? Are you midway through an existential crisis? If so, you’ll find common ground with at least four of the characters in Rabbits in the Precambrian.

An intellectual piece of fringe theatre, written by Josh King and brought to life by Wrong Shoes, the play follows three anxious academics, a cheerfully morbid writer and a nihilistic cult leader as they express, debate and agonise over their respective philosophies. Each character has a distinct worldview and a unique brand of ridiculousness, presenting the audience with questions that do not have easy answers. As well as being a contemporary, explorative work, Rabbits is also a character-driven comedy. Lofty rhetoric is juxtaposed with mundanity, such as the silliness of hurriedly finishing an entire apple before company comes over.

While most of the comic relief comes from Nick and Jess, with Claire as the dismayed ‘straight man’ of the piece, this sense of mundanity extends to the subtly detailed costume design. There’s something deeply funny about watching a self-proclaimed ‘Guru’ wax lyrical about cheating death, all while wearing unicorn themed socks, eating toast and taking a drag from a cigarette. The performers of Wrong Shoes display a strong level of conviction and commitment to their craft, which was a real joy to watch. I was particularly appreciative of the reactions of characters who were not the focus of a given moment, as there would always have an interesting face-journey to observe.

The relationships between these characters were dynamic and intriguing: Reed and Jess make for an endearing married couple, Nick naturally falls into a henchman-like role when sharing a scene with The Guru, and Jess’ moments of alienation at the dinner party provide unspoken tension throughout the scene. If I had one complaint, it would be that the energy and pacing of the work is kept at a nearconstant high. The Guru’s monologues, delivered through a hippie-esque drawl, serve as a welcome contrast to the whirlwind of doubt, glee and frustration that come from the rest of the cast. While each character is somewhat heightened and eccentric, they all have a certain level of depth to them, which is gradually unveiled through the course of the show.

The music and lighting also add to the piece. The music, for the most part, reflects the aesthetics of the Guru, and the clever use of spotlights adds to the themes of storytelling that run through the show. Rabbits strikes a delicate balance between leading the audience by the hand towards a singular conclusion, and utterly bewildering them with philosophical questions. Instead, it’s a play that is thought-provoking without being pretentious, satisfying without being dictatorial, and leaves you pondering its themes long after it’s ended.

All in all, I enjoyed Rabbits in the Precambrian, and I look forward to seeing what Wrong Shoes does next.

This production was on until 15 September https://lineupnow.com/event/rabbits-in-the-precambrain?fbclid=IwAR3tgqz5Rj0t-v0Bi9pGTM_SmxgkSw0orQ0Xovls6Yz-I5p3f0PF3Pr9u6Y