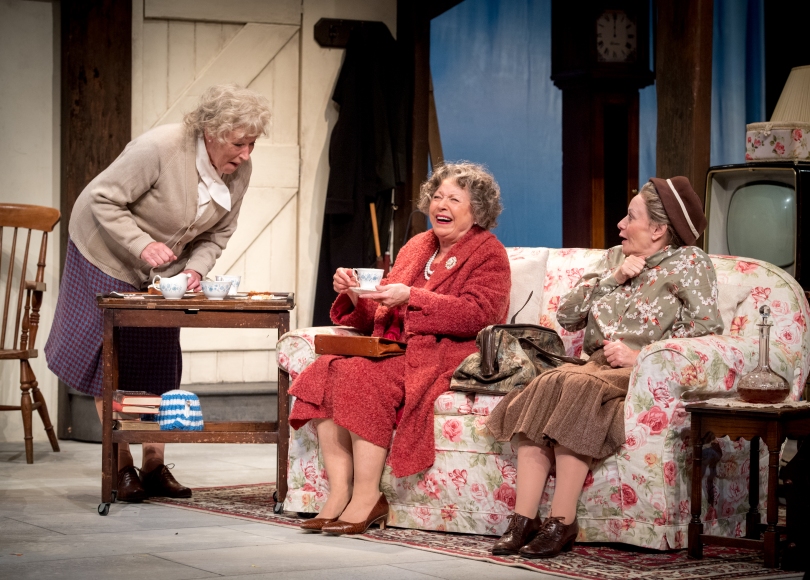 The curtain rose last night at the Churchill Theatre Bromley, on Philip Meeks’ play “Murder, Margaret and Me”. This is a three hander:-  Agatha Christie, Margaret Rutherford and the Spinster.

The play explores the casting of Margaret as Miss Marple in the 1960’s film series and the nature of friendship and secrets.  Sarah Parks, playing Margaret Rutherford, has clearly made a study of all her mannerisms and was quite convincing as the well loved actress. Lin Blakeley (Eastenders) was Agatha Christie and Gilly Tompkins was “the Spinster” who we come to know is the Miss Marple of Agatha’s imagination and totally different from Margaret’s portrayal. At this point I have to say the play would have benefitted from improved sound. This necessity may be down to my hearing I acknowledge but since the majority of the audience were my age or older it would have helped a lot.

Much has been written about Agatha Christie’s disappearance and subsequent discovery in Harrogate but Philip Meeks has his own theory. He comes up with what he considers to be the real reason for her vanishing act. He also exposes Margaret’s family history and fears. I must praise Dawn Allsopp’s set – in particular the beautiful laburnum tree in full flower. I loved the very unusual programme design – like an old discoloured paperback book containing lots of information about the real Agatha and Margaret.

Murder, Margaret and Me is on until 28 September https://churchilltheatre.co.uk/Online/tickets-murder-margaret-me-bromley-2019
and continues on tour https://www.list.co.uk/event/1413274-murder-margaret-and-me/