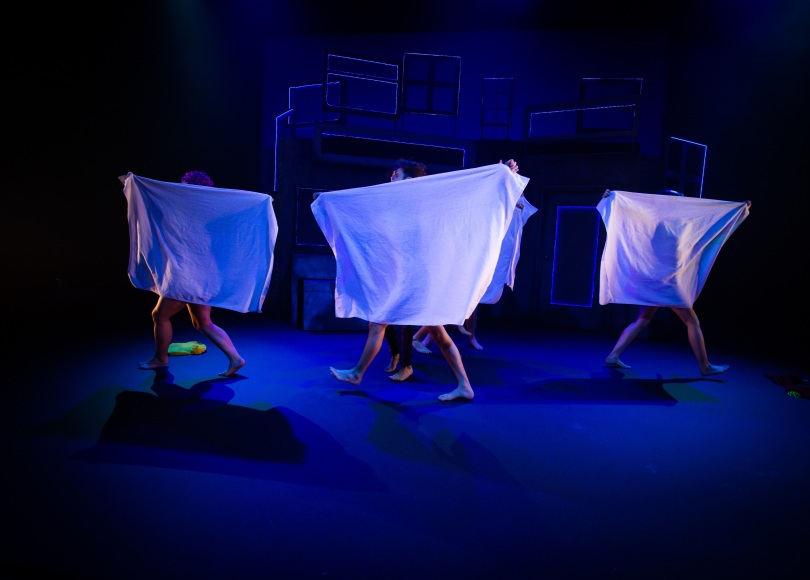 Derrière on a G String’s transforms the everyday movements we make, when performing acts of daily living, into dance choreography, using classical music. It presents a series of comedy sketches using mime, acrobatics, slapstick and of course dance; from ballet to contemporary, in an attempt to make dance, and presumably classical music, more accessible to all.

The classical pieces chosen suit each scene very well. My favourite scenarios are in the first act. “The Great Exhibition,” performed to Johan Strauss’ Radetzky March Op.228, has a group of people in a changing room dancing whilst drying off with towels, which which was funny. In “Bus Stop”   people from various backgrounds, with dogs and babies wait for and board buses to Sailors Hornpipe which was very funny. “The Duvet Debacle,” performed to La Giaconda: Dance of the Hours by Amilcare Ponchielli, is an amusing slapstick method of changing a duvet cover. “March of The Charity Muggers” employs mime and dance to turn the chuggers we see on the street into something sinister. “Flight of the boarding pass,”using Flight of the Bumblebee by Rimsky-Korsakov, made me laugh, when a man who has mislaid his boarding pass, desperately turns himself, and his suitcase, inside out to locate it.”Morning Wood” performed to Peer Gynt is an amusing look at a man having a sexual dream with various partners and permutations. It is fun watching young people having a house party whilst their parents are away and get off their faces on drink and drugs to Peer Gynt Suite No.1 Op46: In the Hall of the Mountain King by Edvard Grieg. Even wittier is the morning after the night before when they are hurriedly cleaning and tidying up in “The Germans are Coming,” performed to The Four Seasons: Summer by Vivaldi. Although it contains some acrobatics it has more dance styles, as well as being hilarious and clever.

However there are some sketches which either went on too long and/or were puerile. In “Left Bank Number Two,” choreographed to Left Bank Two,  we see a row of men sitting on toilets tapping and stomping their feet, initially this is amusingly silly, but goes on for too long. In “The Bloody NHS”using William Tell Overture by Rossini,  a hospital operating theatre becomes bloody and gory, it is silly but not in a humorous way. Some vignettes are nonsensical, others are simply irritating. What was the point of all those people vaping? Why were some women fighting over a sandwich? Several scenarios were predictable; who could predict that the lasers would become skipping ropes? There are also a few stereotypes including fat suited dancers fighting over a giant bar of chocolate. Hey why not dance in a giant swan costume whilst trying to steal someone’s food, whilst playing Tchaikovsky’s Swan Lake Suite?

I understand the concept of Derrière on a G String of wittily choreographing everyday movements and expressions into dance. However it is a bit hit and miss with the emphasis on the latter. Part of the problem is that Derrière on a G String suffers from an identity crisis, it isn’t sure what it wants to be; a sketch show with acrobatics, mime, and slapstick with some dance? The other issue is that it is not coherent enough; there is no overarching thread weaving it together. Instead we are presented with a series of stories, several of which are too long with overstretched punchlines. For me, whilst there is a variety of movement and styles I would have liked to see more dance. The flashes of humour we see do provide us with glimpses of what it could have been. The talented dancers should be praised for making their performances seem effortless.

At the end of the show there was a quick recap of the different stories. Perhaps they thought we wouldn’t remember, as well as making it clear that all these events were just a dream for the protagonists. Overall, Derrière on a G String is promising, unfortunately it rarely delivers.