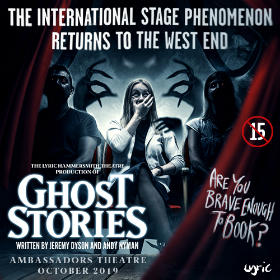 Autumn/Winter in theatre is great for fans of horror and the macabre. There’s Halloween but we also have Christmas when MR James stories come out to play.

Jeremy Dyson and Andy Nyman’s anthology of stories has been entertaining audiences since 2010 both on the stage and in a 2017 film adaptation and this revival at the Ambassadors Theatre is a welcome return.

Simon Lipkin plays Professor Phillip Goodman,  a Professor of Parapsychology delivering a lecture to the audience. He asks the audience two questions; do you believe in the paranormal/supernatural and have you had experience of paranormal/supernatural. There is a huge discrepancy between those that believe and those who have had experience. It sets a tone, those (like me) who want to believe also want to be scared by Goodman’s three stories that he have stayed with him; The Nightwatchman (Garry Cooper), Student (Preston Nyman) and the Businessman (Richard Sutton). At 80 minutes this is a short production and for good reasons; the reactions of the audience probably couldn’t survive any longer.

These are strong stories but this is all about the production; the smoke and mirrors, the darkness, the anticipation of fear. Sean Holmes’ direction plays with the standard terror tropes; flickering lights, Nick Manning’s spine tingling sound and James Farncombe’s lighting making even the safe space of the lecture feel tense. Scott Penrose’s set design and special effects are the real star; from the simple factory set that gives a sense of darkness and eeriness to the Student’s car in the woods. The scariest scenes aren’t necessarily the scariest set. The most haunting story is set in a baby’s nursery.

The highlight for me was the state the audience got themselves in, when Simon Lipkin’s character dropped a pen there was screaming, when someone dropped something on the floor and then had to apologise following more screaming. It does what you want a production like this to do (and what classics like The Woman in Black fail to do); it is genuinely terrifying not just through the production but its conclusion looks at our true relationship with death; not being able to control it. There is something indescribable about sharing that fear with an audience; fear is an emotion to that is treated along the lines of shame but it can be quite fun. I found screaming really cathartic, a release my soul needed.

There are strong performances from all; Lipkin really has the gravistas as a Professor who can keep his audience engaged, entertained and educated in the paranormal and Richard Sutton as the Businessman gives a really charming performance despite playing an unlikeable character. As the blurb says “Keep the secret”, this play is best enjoyed when you know very little about it.

Are you brave enough to book?

Please note: Ghost Stories contains moments of extreme shock and tension. The show is unsuitable for anyone under the age of 15. We strongly advise those of a nervous disposition to think very seriously before attending.

Ghost Stories is on until 4 January 2020 https://www.atgtickets.com/shows/ghost-stories/ambassadors-theatre/