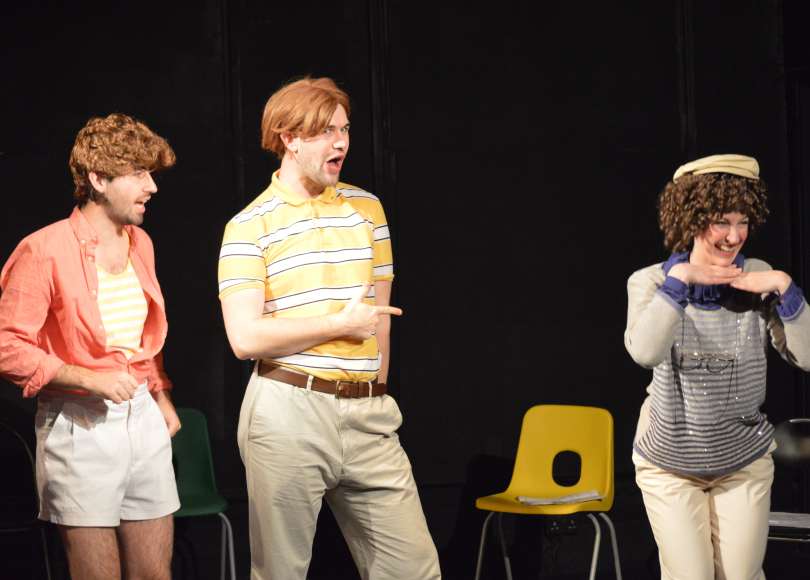 Full disclosure: I’ve been in a foul mood lately, and I badly, badly needed cheering up. Somewhat softened by the wine, and loveliness of the Lion and Unicorn pub’s actual pub bit, I was still the toughest of audiences for Up The Bunty.

The setup has potential – good and bad. It’s theatre about theatre, a cast reunion for a cult classic (sound familiar?), with a lot of washed-up veterans of TV’s Soaperettas (more on this soon), assembled for a desperate Southend live theatre relaunch of the product and their careers. The director is vile, the ASM is harassed, the magnificent leading lady lives off milky tea, the leading man is gay and divorced from the gorgeous second-lead female with ongoing vituperation. The gorgeous comedy Spaniard has moved on, and been replaced with another gorgeous comedy Spaniard. It’s a very familiar setup, full of campery, in-jokes and inner secrets of theatre that everyone knows. A brave one to run in a year that Noises Off has had such a revival, too.

What makes it slightly different to every other backstage bitchfest comedy is first, that there seems to be a murderer on the loose (thank goodness, these people deserve it, and it drives the plot along), and second, the ridiculous premise of the Soaperettas they are supposedly reviving. From dialogue, and interwoven video snippets from a memorial docudrama which give us a break from live action, the Soaperettas seem to have been musical Carry On films, taking the same cast through different scenarios: sci fi, historical, romance, whatever. Beautiful women are in peril, dastardly villains are thwarted, and everyone has a jolly good singalong with a load of sexist seventies double-entendres. It’s a wildly unlikely premise, even before we get to Bunty, a beaver puppet who starred in season one, and who often saved the day. It’s a hell of a mess, but somehow not quite a funny enough one to take flight.

There are plenty of laughs in Up the Bunty though, and not all of them from repeating ‘Beaver!’ till everyone gets it. (Quite a lot of that, though.) Actorly desperation always has an insider edge, which is pleasing. Snippets of the documentary are hilarious, especially interviews with variously catty and incapable Soaperetta cast members, plus cutaways showing a hugely unprofessional set of reactions to the actorly reminiscence. In the live show, the female cast members are particularly strong*, and the satisfyingly plotted late resolution (no spoilers) and final number sent us out cheerfully enough.

But the overall effect is a bit limp, I’m afraid. The pacing lags, early on especially. Two cliffhanger blackouts close on, “Oh shit!”, the most banal shorthand for Something Going Wrong. It’s also tonally odd. There’s a lot of tacky double-entendre played for laughs, and weak Seventies xenophobic humour based on the gorgeous replacement Spaniard being called Juan, as was his predecessor. (Juan Two, sounds a bit like One Two, geddit?) I’m honestly not sure if we were supposed to laugh at the offensive bits, or laugh at people for ever having laughed at them. There’s also a boatload of period-specific misogyny (which, to be fair, is thoroughly tackled by the end); and a lot of jokes about the closeted gay lead (which really isn’t). It’s very sweary – a lot of shouted fucks, which is odd when we’re also supposed to find that beaver puppet naughty. And while the director is meant to read as a thoroughly horrible person, having someone repeatedly shout, “You’re just the tits!” to shut up a female colleague is grim. There’s just too much viciousness on display to relax into the campery and fun.

Overall: Up the Bunty has potential, but needs work. Above all, it needs to decide what it’s trying to be. Rather like a Soaperetta.

*No takeaway cast list, and I missed photographing the single projected cast list slide. Apologies, there are some cracking performers here.