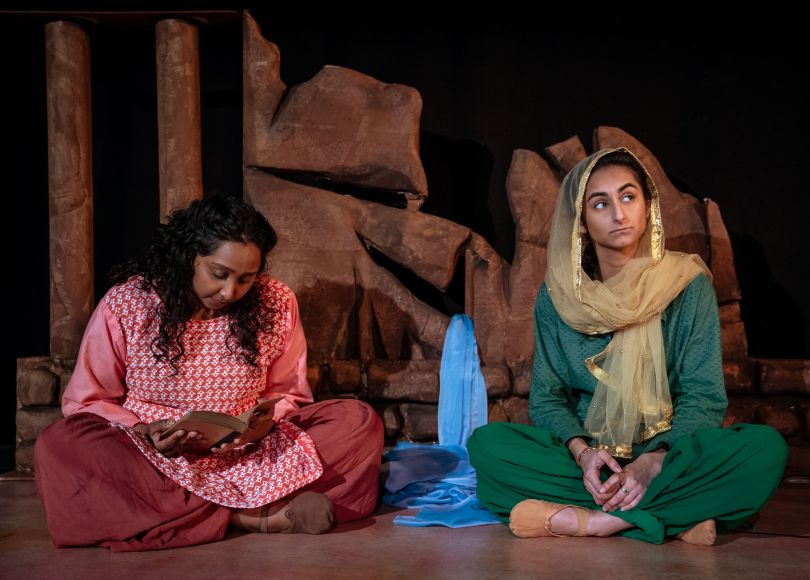 In Guleraana Mir & Afshan D’souza-Lodhi’s new play about friendship in a divided society it would be very easy to make comparisons to the UK and Brexit. I will avoid those because this is about a divide that after 70+ years still hasn’t healed; The Indian Partition of 1947.

Hindu Santi (Rose-Marie Christian) and Muslim Naz (Ashna Rabheru) have grown up together in the same small village. The play follows the election and eventual partition that will drive them apart. As teenage girls they wrestle with their own romantic feelings and their role as second class citizens in their community. When Naz is betrothed to a man their drastic action in response leads to tragedy.

The Thelma’s new work, following on from Coconut and Ladykiller, has strong female relationships. Both leads have a romantic and playful chemistry and the partition as a backdrop to a romance that will never have a happy ending works well but this work felt much safer than their previous work. Coconut (which I enjoyed) was a controversial look at being culturally if not strictly muslim in 21st century Britain, Ladykiller embraced the macabre with its monologue from a woman who had murdered for pleasure rather than defence. Madelaine Moore’s direction with Sacha Gilmour’s set, Rajiv Pattani’s lighting and Sarah Sayeed’s music and sound design gave a sense of time and place, particularly during the Monsoon season scene but the script didn’t always feel clear; how far was Santi looking back when she wrote to her friend from the city, for example.

It all felt rather predictable and a little disappointing that another story about female queers ends in separation and conflict, despite being apt for the time period. I wish Mir and D’souza Lodhi had been bolder and more consistent with this story, the romance felt unfocused in the backdrop and the backdrop felt unfocused in their personal lives. Not everyone knows the history of the partition besides India and Pakistan’s borders being created and it is hard to present a human side to history without more context, even the programme notes seem to skim over how and what occurred. As a result it didn’t feel as accessible as previous works. I encourage more South Asian plays/playwrights etc, it is an area severely underrepresented in British theatre but when stories are told so infrequently audiences need the time to process not only the story but also the context in which they were told.

Santi and Naz is on until 2 February 2020 https://vaultfestival.com/whats-on/santi-naz/