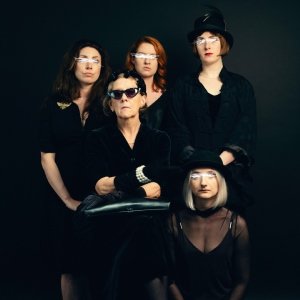 Ostensibly this 60 minute drama deals with the toxic relationships between a mother, Rose, who is a former child star, and her adult daughters and step daughter. Yet What the Dolls Saw is more than that, with undercurrents of the supernatural, it is also an irreverently comic missing persons mystery.

What the Dolls Saw takes mischievous digs at thrillers, using various techniques, including: shadow puppetry; a narrator who breaks the fourth wall by addressing the audience and then becomes part of the action, and of course the eerie dolls. What the Dolls Saw interweaves True Crime Podcast presenting, with traditional Once Upon a Time story-telling, in a hilarious, but sinister way. This is all female production, mocks these and other story telling forms, whilst maintaining the spookiness and tension of a thriller. How do they do it? Firstly, Nic Lamont’s tightly packed and witty writing makes everything possible; nimbly balancing the light and shade in the play. Then there are the talented cast, who sometimes play it tongue- in- cheek, but mostly as a straightforward drama, with several surreal moments, which are really funny, including when the mother makes the daughters do what seems to be a familiar, or rather a family, tap-dancing routine to “Keep Young and Beautiful.” What is also enjoyable is the deliberately ham acting by Rosy Fordham as Rose, the mother, who; intersperses her comments with quotes from Shakespeare plays, seems to be a bit of a lush, is cruel, demanding and very funny. She is rather like the evil mother/stepmother from pantomimes or fairy stories, but much funnier. It later becomes evident why she behaves like this. There are some brilliant one-liners such as “Mummy dearest you don’t look a day over haggard.” Yes, I love twisted humour and this play is wickedly funny.

In What the Dolls Saw, the daughters, step daughter and mother gather for the funeral of their father, a controlling patriarch who was also a cheating husband. He had created an empire from making these spooky dolls. Megan, the youngest, played by playwright Nic Lamont, has gaps in her childhood memories. She is a children’s author, one of her sister’s expresses her surprise that she writes for kids because her books are super dark. Holly Morgan is Christine, the step-daughter, an investigative journalist who makes True Crime podcasts.  Sasha Wilson is Zara, a wellness and an alternative therapy practitioner, after having led a dissolute life dealing/taking drugs, or as Rose bluntly puts it “with weed in her armpits and coke up her arsehole”. Zara has also adopted a mute girl called Belle, whom she treats rather like a doll. All of the siblings seem to be drawn towards darkness.  We learn that there is a long-time mystery of a missing aunt who is the mother’s twin sister. As with all good thrillers there is a great twist. No spoilers from me though, you will have to see it yourself.