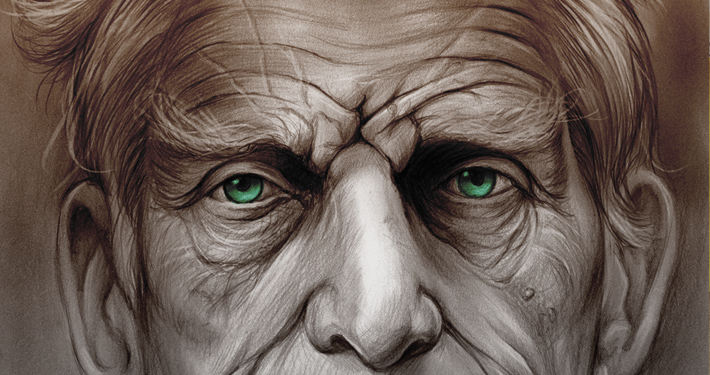 There are countless things to do in London on a freezing February evening like this, but tonight I’ve decided on a bit of Samuel Beckett in Brockley. Three bits, in fact, served up by the Angel Theatre Company. Director John Patterson has revived a trio of Beckett’s later short plays: the rarely-performed Catastrophe and the two mesmerising monologues Rockaby and Not I.

Not I is the better-known piece, and presenting it theatrically has always been a tricky endeavour. The role demands serious acting chops, the likes of Billie Whitelaw and Lisa Dwan being large boots (and indeed mouths) to fill. It’s also difficult logistically – the monologue relies on a certain amount of conjuring know-how from the production team to create and maintain the illusion of a disembodied gob.

Samantha Kamras gives a raw, spittle-spraying performance – Lisa Dwan had gone like the clappers, but Kamras uses different rhythms, the mouth sometimes chattering like jokeshop teeth and sometimes sealing tightly shut for unbearably tense periods. The set design lets it down slightly, the spotlight allowing us to see both the black drapes and, for those of us near the front at least, Kamras’s gaffa-taped nose.
There’s more saliva on display in Rockaby. Bathed In turquoise light, Anna Bonnett nails the right ghostly beats, but she also successfully pulls off Beckett’s stage direction that the speaker be ‘prematutely aged’ – she often seemed to resemble a child and an old woman simultaneously. The performance was so hypnotically sad that it took me a while to clock the drool dangling from her chin.

Between the two monologues was Catastrophe, perhaps Beckett’s least ambiguous work, or at least a play which – like the spotlight in Not I – was somewhat on the nose. This was a faithful interpretation, the dialogue given an arch and crisp treatment by Stephen Donald and Joanna Clarke. The ending, as Louis Fox’s ‘Protagonist’ comes to life, was superbly done – hats off to Francesca Coleman for the brilliantly timed blackout.
Beckett works well in studio theatres, but it’s not without its obstacles. What can be haunting at the Royal Court doesn’t necessarily tingle the spine in a pub basement. And vice versa of course. But John Patterson and the cast have pulled off a terrific triptych here, and I look forward to seeing more of their work. Although next time maybe not in Brockley.

Not I, Catastrophe and Rockaby is on until 7 March https://brockleyjack.co.uk/jackstudio-entry/not-i-catastrophe-and-rockaby/