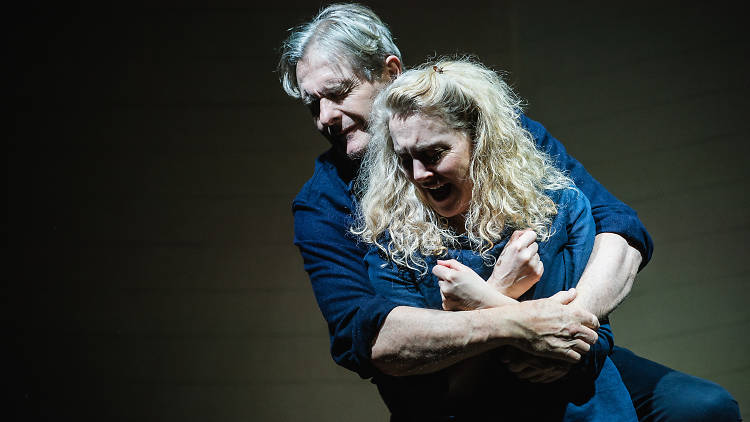 Contemporary plays, even verse plays, unlike their period drama rivals, have one important hurdle to cross: Is it relatable?

In Love, Loss and Chianti Rebecca Johnson and Robert Bathurst relish performing two of Christopher Reid’s 2009 poems A Scattering and The Song of Lunch.

She cuts a fine figure of femininity, placing her expensive red handbag on the back of the chair in the Italian restaurant. She sits expertly poised for a smiling confrontation, and pointedly sits forward in a diaphanous black top with a keen sense of her own power. She is an attractive, mature woman, in the male gaze type of way. This is a fine, nice job, which having said fine, nice job, I mean fine, nice job.

How old are these people supposed to be? It’s difficult to imagine. In one scene Bathurst surveys the scene in an Italian restaurant he used to frequent and laments the changes. Is he really so out of touch?

Yet there is much to admire here in this story of lost love. The language sings its own song in an ode to grief. At one point he describes grief as a pregnancy, as he feels the shifts, the kicks. I’ve rarely heard it described better. Bathurst has a great sense of comic timing and a fearless relationship with the audience. Performances, great ones, should have some kind of awareness of the audience in a small space like this. Extra points: for as the second half begins with the paying punters returning £10 lighter and chatty from the bar, he ups the energy.

It’s the story of his loss, but at the end, when she tears up a copy of his own published poetry, it becomes the story of hers too. By doing this, the engaging way Johnson finishes his sentences when the two appear together comes abruptly to an end. Words can only take a relationship so far. Enough, then, and we’re left wondering, who are these people? Do I really believe they exist, or ever existed in this city? With writing as literary and sensitive as this, it doesn’t really matter either way.