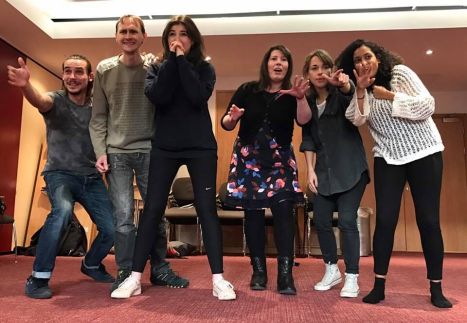 “8 new plays in 12 days” is the boast of Neil J. Byden’s company, Pensive Federation. That doesn’t refer to the running time, fortunately, rather the octet’s gestation. Two teams of bright young things perform four 10-15 minute plays apiece, devised in a flash from the zeitgeistian, millennial thought cloud that permeates the consciousness of right-on liberal luvvies with hairless balls and none.

This being a collective project, there’s a collective theme; group dynamics and the interloper, outsider or individual that arrests them, slipping the proverbial nail file into the figurative bra. In a showcase for new writing, some of these disruptors are more interesting than others. If the sellout intern of Jayne Edwards’ “Scoop” is a little obvious, the personification of well-worn debates on journalistic ethics, power without responsibility to use the old cliché, then the agency plant in a troupe of astronauts in Kate Webster’s “Lying” is more interesting; an outlier who vies to join the long-isolated group on equal terms by giving herself away.

An anthology like this is inevitably inconsistent. Some vignettes are stronger than others. When the plays aim for highfalutin social commentary they veer toward the didactic and clunky, such as Conor Carroll’s Black Mirror influenced “Worm”, that fancies itself as a satire of the imperatives informing trash TV, or Isabel Dixon’s “Glorifying” that reimagines Brexit in the form of an effete bunch of robotic socialites, who’ve become the paranoid victims of their own exclusive, monocultural mentality. Others, like Julie Burrow’s “Destruction” and Jonathan Edgington’s “Legion” play with more abstract notions of free will and group think, but lack a strong dramatic through line; more concepts than playlets. 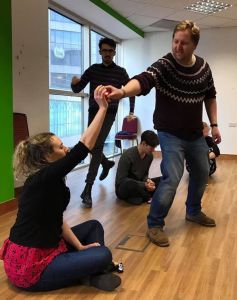 For me, the two most successful pieces, Rob Green’s “Aroma” and Andy Curtis’s “Huddle”, resonated best from being tight slice of life dramas with vivid characterisation and a good ear for social tension. The former presents us with a house clearance for a recently deceased Father, Uncle and ‘arsehole’, with assorted relatives and old acquaintances sorting through old junk and memories. It deftly paints a picture of the play’s structuring absence – the dead Dickie – and manages to say much about duty, loyalty and power, in less time that it takes to microwave a Slimming World meal. Something I like to do while eating chips.

“Huddle” is a simple piece about assorted commuters sardined in a stranded tube carriage. We’re treated to a charming and funny sketch of sisters, divided by education and aspiration, who come together, along with a feuding gay couple, to prop up a prototypical vomiting reveller trying to get home. There’s acute commentary on how solidarity comes to the fore in such circumstances, and how groups thrown together this way throw up, pun intended, unexpected alliances. But that, in a nutshell, is the hook of all 8 plays – the jarring juxtapositions, social positioning and humour apparent in everyday interactions.

An enjoyable taster session of an evening then, buoyed by a smart and lively cast. Okay, writer Kate Webster’s play conflated Die Hard and Die Hard 2, but you’re allowed one mistake on the way up.