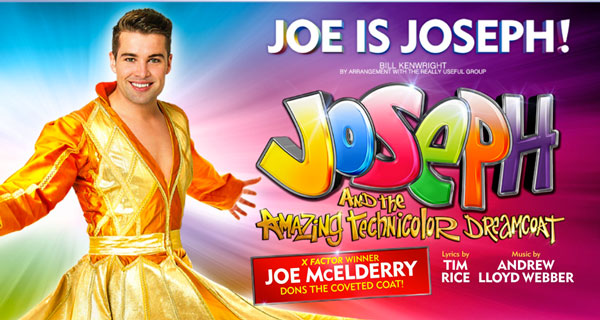 BRITAIN’S GOT TALENT’s Lucy Kay will return as the Narrator in the upcoming 2017 touring production of JOSEPH AND THE AMAZING TECHNICOLOR DREAMCOAT, starring X FACTOR winner Joe McElderry, from 24th January.

Lucy Kay scored her first number one album in 2014, after her stunning debut album ‘Fantasia’ shot straight to the top of the Classical Album Chart. The singer, originally from Leicestershire, shot to fame and captured the country’s hearts as runner up on ‘Britain’s Got Talent’ in 2014. Following her success on the show, Lucy also recorded the song ‘Flower of Scotland’ with the band of Her Majesty’s Royal Marines to celebrate the 350th anniversary of the Royal Navy. Lucy was also a special guest on Andrea Bocelli’s 2014 tour.

As previously announced singing sensation and X Factor favourite JOE McELDERRY will once again wear the world’s most famous coat in the UK’s longest running musical, as the 2017 national tour kicks off at GLive, Guildford in Januar.Joe’s title-role debut in the 2016 production of Joseph was his first major theatrical appearance – and his performance was met with 5-star reviews and standing ovations up and down the country.

Joe McElderry was just 18 when he won the sixth series of ‘The X Factor’ having been mentored by Girls Aloud star Cheryl Cole and beating off fierce competition from Olly Murs and Stacey Solomon. Joe soared to number one on the UK Singles Charts with his rendition of Miley Cyrus’s The Climb and his debut album Wide Awake went straight in at number 3 on the UK Albums Chart. He has since gone on to have two more Top 10 albums, and he became the first X Factor star to release four albums.

Joe, who hails from South Shields, Tyne and Wear, is also the first and only celebrity to win three reality TV shows! He was crowned the winner of the second series of ITV’s ‘Popstar to Operastar’ before strapping on his skis and slaloming his way to become champion of Channel 4’s celebrity ski competition ‘The Jump’ in 2014.

THE LONGEST-RUNNING TOURING SHOW IN HISTORY, NOW IN ITS 36TH UNSTOPPABLE YEAR – REMAINS AN IRREPRESSIBLE DELIGHT…

Joining them is Benjamin James-Ellis who was a semi-finalist on the hit TV show Any Dream Will Do. Since then Ben has starred in a European tour of Dirty Dancing, and as Link Larkin in the West End run of Hairspray for two years. The cast is completed by Henry Metcalfe, Sallie-Beth Lawless, Matt Jolly, Darren Charles, Lloyd Green, Matthew McCabe, George Knapper, Michael Lapham, Michael Colbourne, Lewis Asquith, Richard J Hunt, Amana Jones, Will Breckin, Kevin Grogan and Gemma Pipe.

Having garnered sensational reviews and standing ovations at every performance since its inception over 36 years ago, Bill Kenwright’s ‘amazing’, ‘superb’, ‘wonderful’ and ‘brilliant’ production of Tim Rice and Andrew Lloyd Webber’s family musical has now sold an estimated 20 million tickets is crammed wall to wall with hits, including Jacob and Sons, Close Every Door and Any Dream Will Do.