Shiny Pin Productions, in partnership with the Park Theatre’s The Albatross 3rd & Main is a gritty black comedy looking at US federal law, crime and golden eagles. Does it soar or is the turkey that surrounding the eagle?

Described as ‘gritty black comedy’ the production focuses on three men; Gene (Hamish Clark), former shop owner dodging his ex-wife’s and his own gambling debts, repeat offender Spider (Charlie Allen) and former boxer Lullaby (Andrew St Clair-James). Sadly this is all we get in terms of character development, the play is low on laughs, though there are a few one liners that make is passable as a comedy and seems to speed through without developing any of the exposition or even the storyline.

Spider has found a Golden Eagle, which worth a fortune, but it is illegal to sell. What happens for nearly two hours is not very much; they might being watched, how did the eagle actually die and on and on. It drags on without satisfaction at any stage. It should have so much to say about indigenous Americans 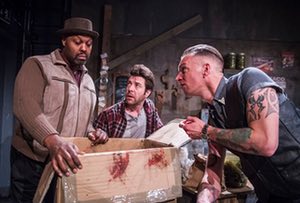 St Clair-James isn’t given enough to do as the scarred and kind Lullaby, who quotes poetry but when he is on the stage the energy rises immediately. He is just a classy actor who gets what little he has been given as character by Simon David Eden’s poor script and rather insipid direction. Charlie Allen as Spider is also one to watch and his character’s development from first half to second is the most convincing thing about this production. The relationship between Spider and Lullaby builds into something dark and is helped by the skilled actors in the role.

The play’s lack of energy isn’t helped by Hamish Clark’s inability to stop his very strong Scottish accent coming through to his wavering attempt at an American one and it is unacceptable for any production, whether school, am-dram, drama school, let alone professional to have an actor who cannot play the part. It is a real shame as Gene is the most interesting character, from what we briefly hear about his life, but his vague attempt at accent suits the play. Nothing is very clear and even the beautifully detailed shop set by, who else, Simon David Eden is wasted on the lack of detail in the play. What is the shop, where are we and why should we care?