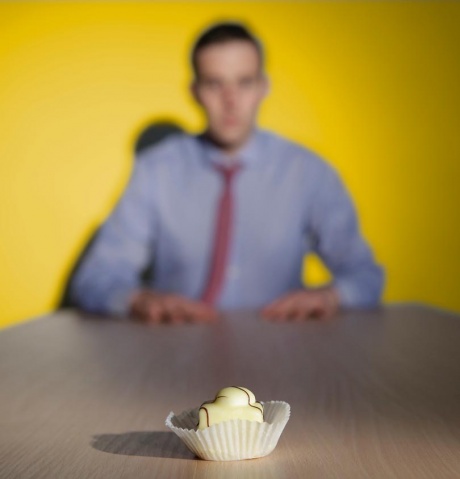 In art, marketing is often used as a metaphor for a sense that we all inhabit a meaningless, shallow culture. And so it is in Focus Group where the audience are less immersed than they are occasional participants in a dialogue that ultimately means little to the play’s message or journey.

We are confronted with the breakdown of the central character and his descent into loneliness through professional underperformance and personal rejection. But we are encouraged to see this at least in part as a result of the emptiness of a life spent paying the bills through such a worthless pursuit as running focus groups for corporations.

More a play with audience participation than an immersive theatre experience Focus Group definitely captured the imagination during its short running time.  The staging was both clever and effective. Simple mechanisms used to delineate between the office. The home and the dream state. The use of lighting and – importantly – darkness allowed the cast to create vividly different tableaus which drove the sense of disconnection and loneliness inherent to the piece.

But it also felt like – by omission or habit – this was a play that had little love for the people whose loneliness it explored. It felt like we were invited to judge this average Joe (or Terry) by his job with little understanding that people in market research have inner lives too. Not ones driven by their jobs but by all the passions that all fully dimensional humans have.

Here is felt like Terry’s loneliness was a judgement of the meaninglessness of his chosen profession. It may be that I am reacting as much to the sensitivities of the current age as to the source material, but I felt uncomfortable judging his life and choices as I felt I was being guided to do. It felt elitist in a capricious way.

Having said that, the play certainly captured the nature of loneliness and the interplay of Joe’s inner and outer lives, his faux cheeriness to the “focus group” audience and his quiet desperation were well depicted. It was moving and disturbing and confusing and amusing in all the right places. While the other characters existed only in their relation to Terry, they too brought a depth and pace to the drama.