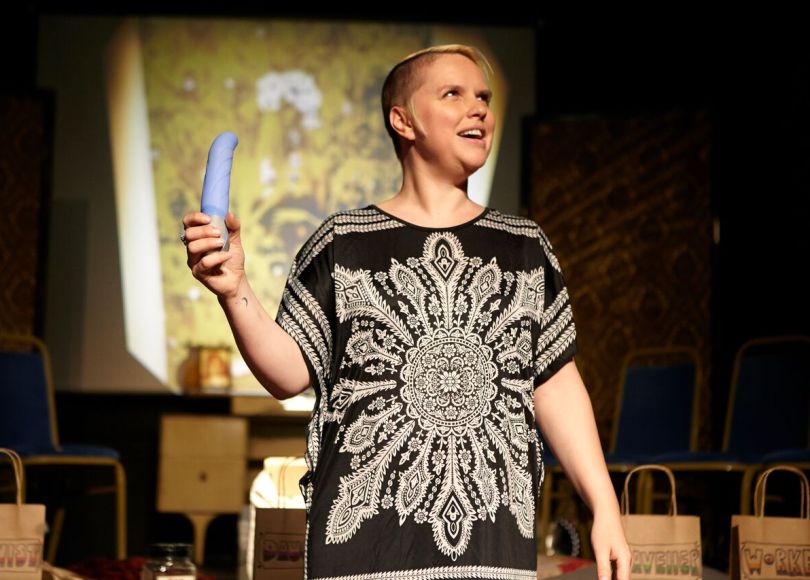 The Vaults on Leake Street is the right venue for a show about squatting in a dead woman’s house and life. Beneath Waterloo Station, in a subterranean space, theatre’s squatting in it.

The artist Jolie Booth, in a one-feminoid show, billed as “extra-live” (etiquette free with assumed added value for the audience), is there to sell us on hedonism, youthful creativity and the romance of the commune. This involves conflating her beatnik lifestyle from 2002 with the life of the lost hippie who once occupied the same Brighton premises. Rummaging through her stuff – letters, photos, diaries (death giving implied consent) – snapshots of a lost consciousness, Booth becomes, in every sense, an Anne Clarke habitué. She revisits her spiritual landlord frequently, hunts for biographical clues, traces relatives, and on the basis of close identification with the woman and her creative aspirations, addictive personality and libido, builds a show out of fading impressions. 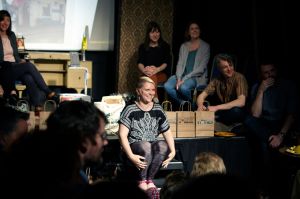 It’s an interesting piece, perhaps because our host has anointed herself as the dead woman’s spiritual successor. There’s talk of sharing wavelengths, being linked by something more universal than boring old genes. The lineage being traced here is sociological, cultural. Booth sees Clarke as her prototype, fatally compromised by patriarchal bullshit like domesticity and motherhood – bohemian buzzkill. In Clarke’s alcoholism, that inconveniently, when one’s trying to build a human being, obscures the last 16 years of her life, leaving blank pages, she sees a cautionary tale. We learn the artist doesn’t drink anymore, though we’re encouraged to toast the deceased boozer with a shot of tequila. This felt like shooting a gun in memory of John Lennon. At the end, one imagines the last fucking thing Clarke wanted was to be remembered with alcohol.

Your enjoyment of the show and the opportunity to interact with artifacts from both women’s lives, in a representation of Booth’s old squat, will depend on how interested you are in either. Is this self-absorption and the hijacking of biography or a novel variant on Who Do You Think You Are? One wonders about those missing 16 years. Did Clarke repudiate her younger self? Did a moment of clarity lay waste to the affectations of the past? And would someone who didn’t consent to becoming public property enjoy being ventriloquized on stage? Our host has no more idea than we do but it’s a compelling evening; a chance to watch the watcher as she pins up a proxy.