Brilliant acting and energy can’t quite cover the wasted potential of a thin script.

The legend of Don Juan dates back four hundred years. A byword for licentiousness and excess, re-imagining this iconic figure for the 21st century is ambitious task. In his first non-Shakespeare stage role since 2004’s the Pillowman, David Tennant is more than up to the job. However, writer/director Patrick Marber plays it mostly straight by giving us a fairly unexamined portrayal of a man whose dedication to debauchery stops for nothing.

David Tennant’s sheer unbridled joy and abandon carries things along nicely, ably supported by a cast better than the material. But the play fundamentally can’t decide what it is: a debauched romp? A deconstruction of the evils of excess? An indictment of modern faithless society? A standard morality tale? An argument for sexual liberation? An argument for living by your own rules? A ‘One Man Two Guvnors’ style romp about the relationship and hi-jinks of a wild master and his reluctant but loyal manservant (brilliantly played by Adrian Scarborough, whose Stan is the only character to achieve real depth)? 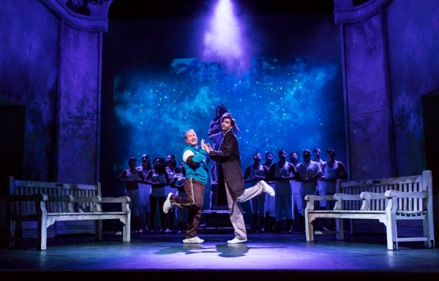 The constant lurching creates odd tonal shifts and leaves a rather flat feeling. Overall, it feels like the audience is invited to a beautiful sexy party where the drinks and the laughs never stop. But a play about sexual politics simply cannot be so reductive. A brilliantly performed nihilist libertine deserves more than disposal one-dimensional female characters to play off. The sexual, race and class politics are uncomfortable. A working class woman is sexually used and humiliated and then never seen again. But she’s a gold-digging chav, so who cares? Actually none of his conquests or failed conquests, including a newly-wed whose bridegroom’s death Don Juan is directly responsible for, are ever seen again – bar his wife, who gives a meandering speech about how he broke her heart (after spending months pretending to be a yoga-doing, lentil-weaving charity worker and then marrying her in order to score her virginity). Danielle Vitalis’ quietly dignified delivery is affecting, but her insistence on thanking Don Juan for giving her the gift of unlocking her sexuality is cringeworthy. Is this 50 Shades of Gray? Can someone please get this woman a vibrator, and tell her her sexuality is not male property?

A few brief attempts at critical analysis are raised but then debunked (is Don Juan’s behaviour really due to the tragic loss of his mother?). It’s unclear whether Marber is trying to examine the character’s inner landscape, or to subvert the kind of reductive cod psychology so often used to justify and humanise bad behaviour. But is Tennant’s Don Juan to be considered a villain? We are told, explicitly, that Don Juan is  “not a loveable rogue” but everything in the staging shows the opposite. The script encompasses race, religion, female sexuality, the exploitation and commodification of sexuality, sexual liberation, death, and the importance of remaining true to one’s own self. An awful lot of potential, alas wasted. It’s unclear what the message is or even if there is supposed to be a message, as moments of real insight are lost under a tidal wave of raucousness and non-stop gags: A supposedly mutually respectful encounter with a group of intelligent and appreciative prostitutes (the worst cliche of the ‘happy hooker’, made more problematic by the adoption of generic cod-Eastern European accents) is interrupted by the arrival of Don Juan’s stern taciturn and disapproving father. After an uncomfortable confrontation, Don Juan Senior’s exit is interrupted by Happy Hooker #1 announcing, “If want fuck father it cost extra, because old.” Funny? Not really. In the 17th century bribing a religious man to blaspheme could make a shocking statement about religious hypocrisy and the rejection of entrenched faith systems; in agnostic 21st century London taunting a Muslim rough sleeper feels like nothing more than thuggish Islamophobia. Even Don Juan’s violent death is hastily skated over before the entire cast start getting down, the genuinely eerie stone harbinger of death suddenly revealing a light-up neon disco ball face because PARTY PARTY PARTY!

What Don Juan succeeds at, ultimately, is a deconstruction of celebrity and excess in a world increasingly devoid meaning. It’s hard to not appreciate the irony of an actor of Tennant’s status (who at this point could read the phone book onstage to standing ovation) demolishing our narcissistic unexamined me-me-me “Welcome to my vlog, today I ate a plum” culture. In a disconnected world, without faith, without boundaries, and ultimately without consequences, what else is there but pleasure to distract from the long slow grinding march towards the grave?