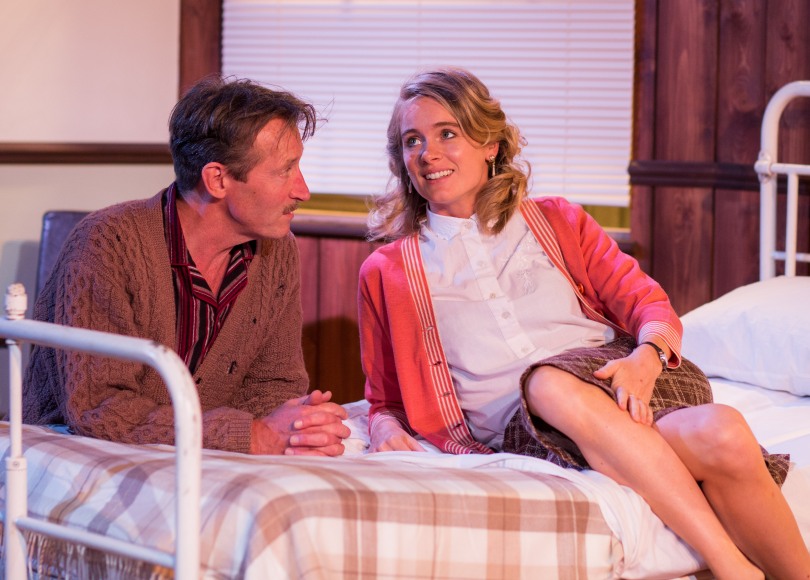 On what would turn out to be his death bed, writer George Orwell proposed to Sonia Brownell, an assistant magazine editor 16 years his junior. Brownell, in love with French philosopher Maurice (who’s married) and a fixture at fashionable London gatherings of artists and writers, was initially reluctant to accept but later warmed to the idea. Why she did it and why he wanted it are explored in Tony Cox’s Mrs Orwell.

Orwell (Peter Hamilton Dyer), his body ravaged with TB and his mind wracked with guilt for past wrongs, doesn’t get women and seems best able to express himself through creepy expressions of lust. Even to Sonia (Cressida Bonas), who he’s genuinely in love with, his offer, stiffly made in his hospital room, is more akin to a business proposal than a romance. If she marries him she will inherit his money and become his literary executor, with few conditions.

Present through much of this is the up-and-coming artist Lucian Freud (Edmund Digby Jones) who visits George in order to sketch him, and to see if he can get Sonia into bed. He only partly succeeds. Sonia is a woman who knows her own mind and something about George has attracted her, even if Lucian is there to remind her that George isn’t up to being a proper husband.

By the end of the play, Sonia has willingly taken over much of the organisation of George’s life from his publisher Fred Warburg (Robert Stocks) and is about to take over from Nurse (Rosie Ede) and support him through his recuperation. It’s an unconventional love story, and love isn’t necessarily the word for it, but it’s genuine.

The slow reveal of Sonia’s growing love for George is well played by Cressida Bonas, who by the end of this story seems like a woman who’d kill to protect her man. Peter Hamilton Dyer is also brilliant as George, a troubled man defeated, rallied and then ultimately defeated by his illness. Edmund Digby Jones’ Lucian is a wonderfully louche presence and he has a lot of fun with his role. The way he walks in and out of George’s room, swinging his satchel and his grandfather’s fur-trimmed coat, is sublime. The set, designed by Rebecca Brower and Daisy Blower, is also very impressive for the way in which it gets so much from such a small space.

Not mentioned in Mrs Orwell, but seemingly still a part of it, is that Sonia was supposedly the model for Julia in Orwell’s masterpiece Nineteen Eighty-Four. In the book, the main character, Winston, lusts secretly after the much younger Julia, who ultimately betrays him when they are both captured by the Thought Police. That Sonia didn’t betray George and was ultimately a fierce protector of his estate and legacy, is heartening. Tony Cox’s play does her story justice.