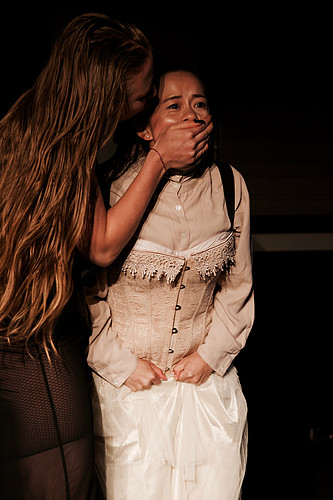 Covering the story of Erzsébet Báthory, allegedly one of Europe’s most prolific and powerful mass murderers, Skin Deep has an ambitious remit. We jump straight into sixteenth century Europe, watching Erzsébet grow up continually being denied the chance to train as a soldier like her brothers, much to her frustration, and her eventual marriage to a war hero of the Kingdom of Hungary.

Although much torture and violence, both physical and mental, features in the play, it has to be said that the title of the play describes its main problem. Báthory’s story is complex and her alleged death toll as many as 650, so even though the play clearly concentrates on her early life, it hardly scratches the surface and ends at a fairly unsatisfactory point. The narrative conceit is a neat allegory but is a little obvious for the content of the play.

Attila Theatre’s company do a spirited job of living up to the gruesome source material, with Ashley Winter convincing as an intense and frustrated Báthory, and Anna Darvulia played by Hanna Rohtla, amusing as a sadistic brothel mistress, who encourages Báthory’s violent urges. Steady support is provided by the mischievous chorus of maids, who provide useful context for the plot. Oscar Scott-White does some nice work as said war hero Ferenc Nadasdy, describing the weight of his truly barbaric war crimes and the damage it wreaks on his psyche. However, the constraints of the play’s duration result in a narrative that both indulges itself on comparatively small events and fails to properly tell what is one of the more interesting stories of Europe’s nobility. The fact that what IS told is enjoyable and compelling is a tribute to Attila Theatre’s ability to conjure up the dark world of sixteenth century Hungary with the power of a few props and imaginative adaptation of costume. Regardless of the shortcomings, this play is well worth your time.

This post was edited on 8 August. Anna was played by Hanna Rohtla, not Phillipa James.