This was reviewed by Shanine Salmon on press night. Oliver Wake’s review can be found here

Boom is a play unsure of itself. Is it a story of Adam and Eve in the time of Craigslist, is it a biting satire on cultural and biological heritage when everyone is ignorant about where they came from or is it none of those things; an absurdist play trying to find itself and perhaps find its audience.

Jules is a student who majors in Marine Biology, Jo is an English student studying journalism drawn to Jules online ad promising “sex that will change the world” thinking she is in for a good time and a good story for one of her classes.

It is here  Peter Sinn Nachtrieb’s play loses its way. It should be an apocalyptic tale of what happens when two people are thrown together because there is nobody or nothing else. Instead it aimlessly drags along, with even the characters’ back stories failing to provoke any emotive response. Jules’ family are dead, Jo is an outsider due to a medical condition. These people should not be together but fate (or the internet) has brought them together and they have to make the best of it. Sadly so does the audience.

There is a third character, Barbara is our guide. Literally, the tour guide as we are all watching this story of our beginning as it turns out we are in a museum. She sits in the corner and controls the story. In light of recent Twitter controversy about how ethnically diverse Roman Britain was,  this play has a lot of to say about history and our ignorance of it. The problem is it all feels so stale and flat. Mandi Symonds feels like she is in a different play; giving energy and emphasising text that doesn’t deserve it. The narration, which can work well (see Rocky Horror) is only needed because the rest of the play is undercooked without it.

Will Merrick’s Jules gets my biggest sympathy: an accomplished screen performer he does he best with weak material and even weaker characterising. His gay marine biologist’s motives are sincere and he has good chemistry with Naomi Sawyerr’s Jo, but I was never entirely convinced by her character, which was underwritten or her performance, which was over the top to make up for the fact it was underwritten. Everyone had an air of wishing they were somewhere else.

There is an unforgivable blocking decision that means a key prop, a fish tank, is mostly out of view for anyone towards the back. Good performers are only as good as their material and nothing or anyone stands outs.  A defibrillator is brought out towards the end, something this play desperately needs. When energy is missing on stage then it is missing in the audience. The lack of focus at every stage of this production means the audience has nothing to attend to. There is no urgency to this production, yet equally no slow build to a satisfying conclusion.

I am baffled not only by this play but its success in America, where it had multiple runs, across multiple states. I speculated that in the UK our attitudes to religion and evolution differ from American education and culture but that fails to explain its inability to entertain, to have a purpose beyond the personal interests of the writer. Good writing should make you care and this fails at the first hurdle. 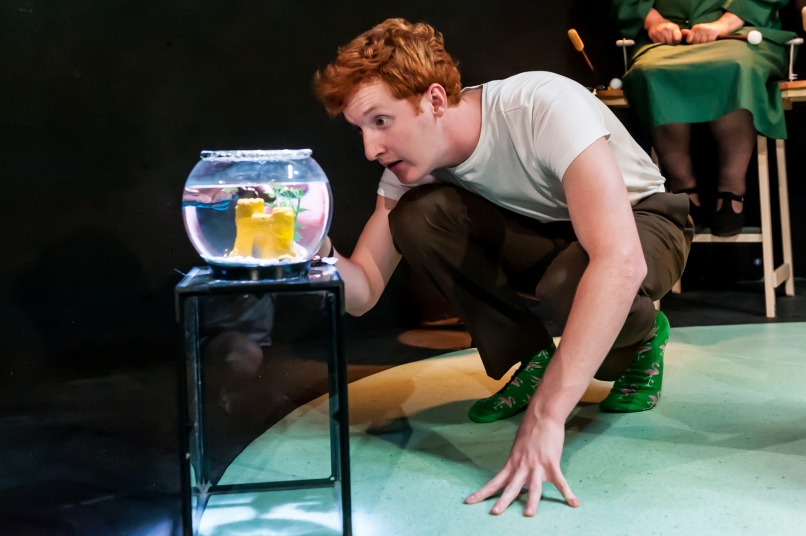