John Galsworthy is most famous for his novels, in particular, The Forsythe Saga, which won the 1923 Nobel Prize for Literature. Windows, his 1922 comment of interwar society should have become a well known classic but beyond the argument of the point of war there isn’t much point to this story.

Geoffrey Marsh (An excellent David Shelley) is a liberal journalist with a good heart, warmth, and humour.  His chivalry, and possibly philanthropy lead him to take in his Window cleaner’s daughter, Faith (Charlotte Brimble), a beautiful woman who has just come out prison for murdering her new born child. This is never as dramatic as Galsworthy seems to think. The revelation comes too early and her reasoning, based on class and reputation, seems logical even 21st-century theatre. The whole story is a bit of a mess. Is Faith a cold and reckless woman or just misunderstood as she justifies her motives for killing her child? A tale of decency and morality it is hard to gauge if any of the characters show any of those characteristics. 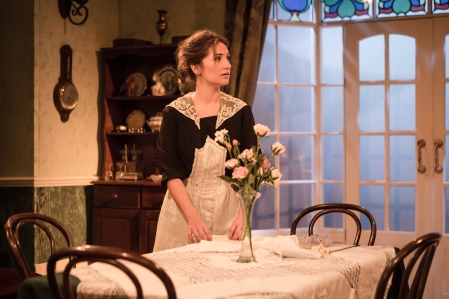 Faith Bly is one of most complex characters I have seen on stage. It is hard to not to judge her actions, yet impossible not to understand her logic. The death of her baby was because of a society that wouldn’t support her and still continues to reject her. Has prison made her the way she is? Is she manipulating the Marsh family about her past? Could she be just naive about life and her place in it?

The issue is Galsworthy is a good writer with too much to say. This works when writing a novel but so many issues are squeezed into a 2-hour play. Johnny March (Duncan Moore, who seems to be typecast as posh man who falls for a girl from the wrong side of the tracks) has come back from the trenches and still not recovered, not helped by an indulgent mother Joan (Carolyn Backhouse) and an indulgent Cook (Janet Amsden) so we get a lot of anti-war rhetoric asking what the point was and if it was all about self-preservation whilst watching a selfish and self-indulgent family treat their staff poorly. It is a high-quality production, with a stunning set by Alex Marker, of a mediocre and smug work full of meaningless metaphors about the windows Mr Bly (Vincent Brimble) cleans.

As a comment on class and expectation, it is incredibly relevant; the issue of post-traumatic stress disorder, women’s place in society and what it means to be charitable could feasibly appear in a modern tale but as a story it is predictable; disinterested in the consequences of its actions. What makes the production work is the beautiful set and the chemistry between the Marsh family with some lovely scenes between Shelley’s Geoffrey and his daughter Mary played by Eleanor Sutton that looks at their closeness and warmth towards each other, in contrast with the cold and stubborn Johnny and Joan, but it all feels so empty. Why does Joan March have a hostility towards Faith that goes beyond her conviction for Infanticide? Does she hate women? Does she hate poor women? The story glosses over why we are here and a bit more background into the characters would improve this tale immensely.

At times it feels ahead of its period but this is not Galsworthy’s finest work and he has got a much better production, from director Geoffrey Beevers, than he deserves.

Windows is on until 9 September http://www.ticketweb.co.uk/venue/finborough-theatre-tickets/FINBOROERD/905