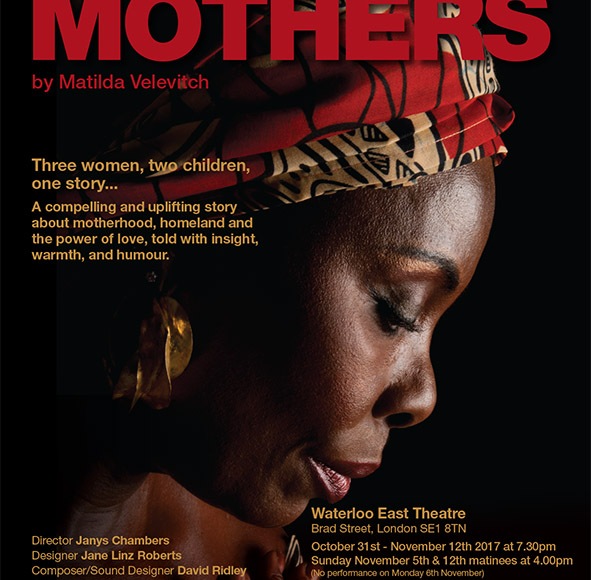 Three days after watching it, Three Mothers is still living with me, which should tell you the tremendous power of the talents of Matilda Velevitch’s script, Janys Chambers’ direction and Clare Perkins’, Roberta Kerr’s and Victoria Brazier’s acting.

Matilda Velevitch’s superb writing, skilfully interpreted by these fantastic actors’, have created exquisitely observed characters, about three individual women who have the resilience to sell, beg, borrow, and on one notable occasion, steal to live through harsh circumstances. The play is often harrowing, but there is also a lot of laugh out loud humour. Three Mothers entertains and educates, it is funny, it is harsh, it is informative, but not preachy.

Three Mothers began with Clare Perkins’ Khady, a Senegalese woman living in a small town in Senegal, sewing a piece of cloth as we, the audience, take our seats. Perkins’ depiction of Khady is sometimes painfully honest. I love Khady’s cutting humour, which makes fun of the some of the people in her life, including her business rival and customers. Khady, who is a seamstress, has her own stall selling traditionally printed cloth and clothing. Khady addresses the audience in a very easy going way; it is as if we are her friends with whom she is discussing the trials, tribulations and triumphs of her life. We learn of her sacrifices to obtain enough money to send her eldest child, her son Lamin, to Europe with the intention that he will earn enough money to send home to support the family. Khady needs the money to pay for her youngest child to get medication for her asthma. She also needs money to send her other daughter to school. Khady is not solely relying on Lamin, she is a grafter. Khady hustles, borrows, sells and saves to try to support her family. But it is not enough, which is why she sends her son on the treacherous journey to Europe known as Mbekeme [my apologies for the spelling]. Not knowing if he will live or die, but in the hope that he will work to send them money it is a tremendous sacrifice.

The next character we meet is Gisela. The direction and acting is so brilliant that I was able to focus on Roberta Kerr’s Gisela, even though Khady is still on stage in the background going about her everyday tasks.  Gisela also addresses the audience as if she is thinking aloud or having a conversation, it is also very natural. Gisela at first seems quite a hard woman, but as the play progresses her personality is revealed in glimpses until we see how difficult circumstances and tragedy has formed her. We realise that, despite her tough exterior, she is a caring person.

There is also a lot of humour in the play  from Khady and Gisela. Although Khady’s story is set in a small town in Senegal, her descriptions of the behaviour of her business rival and the intrusiveness of some of her customers are so familiar. These are characters many of us have encountered in our lives.

Gisela is extremely critical of others and seems to complain about everything. She seems to be very fastidious and proper. Gisela talks about her life as an emigrant to England in the UK from Bavaria in the 1960s. She married a British doctor who became a GP in Thame where they lived for 40 years.  She captures the British middle class hypocrisy, habits and racism. Gisela explains that even though people never called her a Kraut, her nationality always came up.  So she would pre-empt people by referring to herself as a Kraut.  Gisela detested that no-one showered before swimming in the public swimming pool, describing when a man “slipped in beside me smelling like a beer mat.” There is a lot of truth in her sharply observed criticisms, including that British humour “feeds on the very worst and makes it palatable.” She also complains that British bathrooms had “carpet on the floor and rubber hoses on bath taps.” I am old enough to remember this and laughed along with the audience, as it was accurate and awful.  Gisela’s exasperation with some British habits is done with a lot of humour.  It is much funnier than what I have written. As the play progressed, so did Gisela’s character and I was as invested in her as I was in the others, Khady and Erika, played by Victoria Brazier.

Erika enters the stage in ragged 1940s clothing, cradling a bundle.  The stage is still occupied by Khady and Gisela however I immediately was drawn to Erika. Erika was Gisela’s mother, they were part of the largest migration of people in Europe which occurred immediately at the end of World War II. Millions of Germans were forced to leave or fled eastern Europe and hundreds and thousands of Jews who survived the holocaust, sought safety by moving west across Europe. There were also thousands of refugees trying flee from the Russians and the Communist governments in eastern Europe.  Gisela’s mother was an ethnic German who was born and raised in The Sudentenland  and was forced to leave at the end of the war. Erika’s story is particularly harrowing filled with starvation, humiliation, brutality and death. Using the last of her resources, Erika dragged herself and her baby along what was known as a Death March, arriving in a town in Bavaria. She and the baby survived and thrived due to her tenacity and also because of her skill as a seamstress.

We are brought up to the present by Gisela who informs us that she has returned to the Bavarian town where she was raised. Gisela witnesses and to a certain extent assists, some of the refugees and migrants who are part of the biggest mass migration through Europe since the second world war. 120 refugees and migrants are sent to the Bavarian town and are initially made very welcome. Eventually Gisela becomes involved in the refugee crisis by assisting a young male refugee who had come to her aid when she fell.

Due to clever writing, direction and acting, the transitions from the lives of Khady, to Gisela, to Erika and back again, through different continents and eras were effortless. It was as if the characters were passing a baton from one to the other in a long marathon. Three Mothers showed the connections between each of the women’s lives, not just individually but globally. Three Mothers shows the parallels and links between the mass migrations of people after 1945 and in recent years.

There were many harrowing moments where I felt for the losses of the three mothers. When Khady noticed that one of Lamin’s sandals is cracked too late, because he is boarding the bus to take him on the first part of his journey to Europe, you see tears in Perkins’ eyes, a tear fell on her cheek and I teared up too. I also empathised with Khady’s despair when she says “I feel as if I have been holding my breath forever” she cries out in desperation watching and willing her mobile to ring so that she can know whether Lamin is still alive. It is so moving when Gisela watches the TV and gets angry at mothers taking their children in a boat across the sea to Europe; she explains how she searches the boats on TV for faces of children. Erika’s story has many terrifying moments, including when she explains the camps run by Russians are not safe for women because guards take women away for “kitchen duties.” It is chilling when Erika, exclaims at how many lone children there are on the same journey.  She  describes various horrifying scenes on the Death March.

However it is not all darkness, Khady and Gisela each also have fond memories of their lives which are joyful. Gisela described happy memories of how she saw her son, “in places we never went,” even though he  drowned at 16. She would see him on cycling trips to the lake and where other children were playing. And it was only when she looked at her “72 year old hands I stop.” She remembers he is no longer alive, it is very poignant. Khady’s description of how as a young girl she dreamed of being a fashion designer is funny especially how she once made a pair of pantaloons but was mocked by the local children when she wore them.

Even though the refrain from each woman is “hope is not a strategy” I am relieved that Three Mothers ends on a very hopeful note.

Three Mothers makes the connections between the different stories of migration over different eras. It reminds us that history does repeat itself. It is also a testament to everyday heroines who use their resources to survive and thrive in harrowing circumstances. Although I have tried to do justice to this beautifully written and acted play, the best thing I can do is to urge you to go and see it.

Three Mothers is at Waterloo East Theatre from 31 October to 12 November 2017.