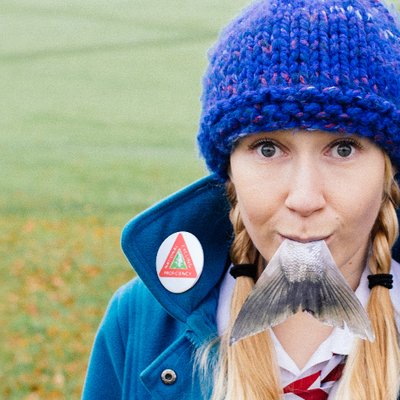 I have three rules about the best theatre experiences. Not the highest art or the most Life changing, but a bloody good night out at the theatre.

Rule one: I want to laugh for the first three quarters, cry at or near the end and be roused to my feet when it’s over.

Rule two: at no point must I be tempted to look at my phone.

Rule three: I want to feel like I’ve been charmed.

Bicycles and Fish passed every rule with flying colours. This one hour long, one woman show was non-stop entertainment.

The story of a day in the life of 16-year-old (Katie Arnstein) as she illuminates in the space of a day how bloody awful being a girl can be. She doesn’t shy away from the grim, sticky, awful biology of young womanhood, covering cystitis, periods, and confusion at complaints about breastfeeding, and the constant sense that her body is a battlefront.

As much as she crushes idealistically on the class joker, she is also let down and threatened by other men who are old enough to know better and gross enough not to care to.

The staging is sparse. One gets the strong sense of a shoestring budget. But that makes it all the more impressive how much Arnstein has made the world that we are watching complete. My only note of caution is that the Dylanesque opening and closing works in this intimate space, but is the only part of the show I struggle to see transferring well to the bigger crowd this piece deserves.

But that’s a mere quibble, and who needs those when one has been so comprehensively charmed?

For a variety of all too female reasons, I wasn’t much looking forward to going out to the theatre tonight. But I did. And I laughed, I cried and at the end, I rose to my feet.

When all is said and done, what more can I ask for?