The Edinburgh Fringe 2017 sell-out hit Great British Mysteries? arrives at the Soho Theatre this week for a limited run. In a one-hour runtime, we’re witness to a hilarious live mockumentary, bound together by the friendship of two lovable oddballs.

Presented by ‘historian’ and supernaturalist Olive Bacon (Rose Robinson) and her dim-witted but earnest sidekick Dr. Teddy “Teddddy” Tyrell (Will Close), Great British Mysteries? investigates some of the world’s most perplexing mysteries. Bacon and Tyrell have an illogical and bizarre explanation for everything, including my personal favourites: “The Princes in the Tower” and “The Success of The Feeling”. The show uses (very) dramatic reconstructions, interviews with witnesses and experts plus on-location investigation techniques. Bacon and Tyrell’s exact findings don’t really matter, we learn because proof doesn’t really matter. It’s a smart and genuinely funny spoof of supernatural investigator programmes. 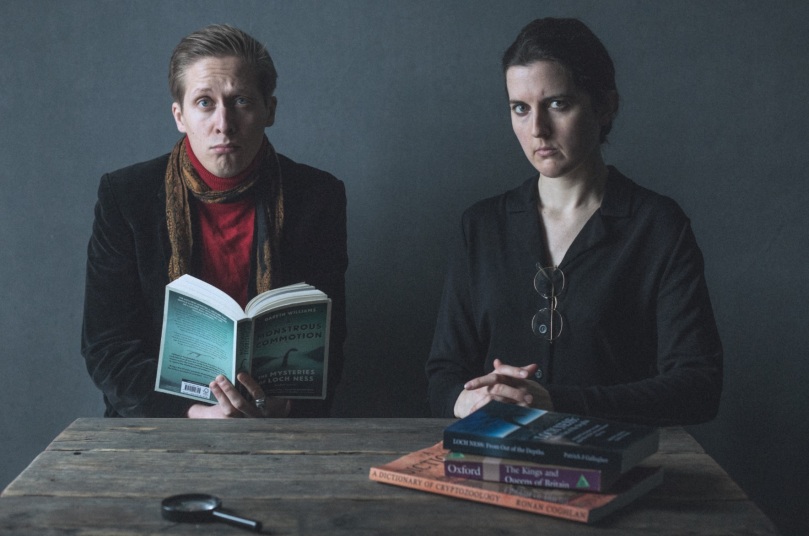 This is a great bit of Fringe theatre, with everything one might need from such a thing. There’s cleverly observed comedy, some excellent Powerpoint skills on a projector and two gloriously over-the-top main characters. Robinson and Close throw themselves whole-heartedly into the pure ridiculousness of Bacon and Tyrell and all they stand for. It’s ultimately their excellent chemistry that binds the whole show together (and offers the show’s heart).

The sound is a wonderful mishmash of over-the-top supernatural documentary music with the occasional Hollywood blockbuster soundtrack and deserves its own mention. There’s a bit of Lord of the Rings and even Titanic in there. It makes for a beautifully silly backdrop to a beautifully silly show, subtly adding humour to a show that is not overly subtle.

There are moments when Great British Mysteries? dips in quality, where there are long stretches of time with fewer laughs. The pacing, at times, is slightly off. Some mysteries, naturally, are funnier than to unpick than others (as are some completely wrong conclusions), and some of the running gags run for a little bit too long. Teddy, for example, struggles to improvise his lines after preparing for the wrong episode of the show, which starts feeling more mean than funny when the gag runs on too long.

Nevertheless, Great British Mysteries? is a real audience pleaser, which keeps audiences mostly amused throughout. It’s an example of a great parody that harms nobody, except maybe Noel Edmunds.

Great British Mysteries? runs at Soho Theatre until May 19.