I have always been a huge fan of Cicero, a humble lawyer whose extraordinary gift for rhetoric and oration saw him become one of Ancient Rome’s savviest political operator as Julius Caesar’s relentless march to power led to the death of the Republic and the birth of the Roman Empire. The life of an extraordinary man living through an extraordinary age is too large for one play, and here the latter two novels of Robert Harris’ Cicero trilogy are adapted into two separate plays (Conspirator and Dictator), each separated into three sections, essentially creating six one-act plays covering the life history of one of Ancient Rome’s most important but most overlooked character.
The finished product, IMPERIUM, is a seven-hour theatrical feast. The action takes place on a bare but evocatively stoney set, cowering under the inescapable glare of a giant globe, which by turn becomes the moon; Jupiter; is streaked with blood; and hosts a murmuration of starlings which turn into a net ready to snare Cicero as he approaches his end. 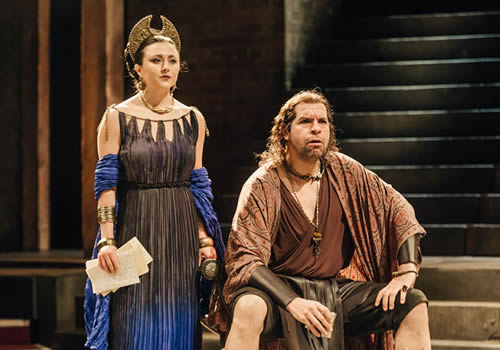 It’s the kind of thing the Royal Shakespeare Company does exceedingly well: epic, intellectual productions with stunning tableaux staging and impeccable acting. And what acting. The large cast is without flaw, with special mention going to Joseph Kloska’s Tiro (Cicero’s freed slave and right hand man, and the fourth-wall-breaking narrator) whose charismatic and warm performance helps guide audiences through the complicated politics and keep the huge cast of characters straight; and Peter de Jersey’s Caesar, “every woman’s husband and every man’s wife”, whose glitter barely hides an immense brute power and menace. The female characters do much with relatively little stage time. It’s hard to create any kind of gender parity in a play set in such a male-dominated society, but the women (wives, whores, mistresses, and virgins) use their very smallness to make subtle points about gendered power structures and the frustrations of having to rely on ‘great’ but fallible men. 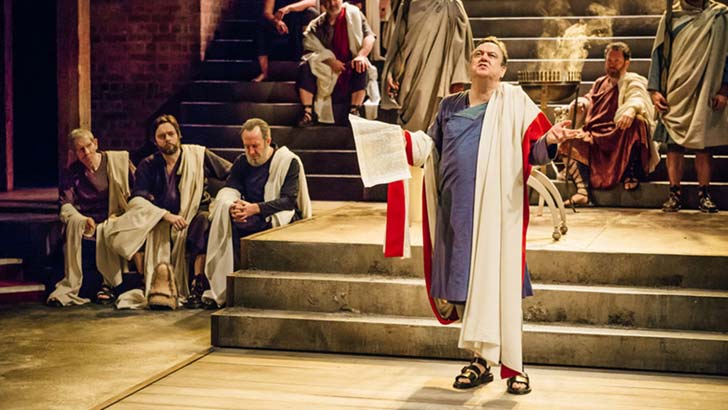 But these plays belong to Cicero, and Richard McCabe’s portrayal of a brilliant but difficult man should go down in history as one of the theatrical greats. McCabe dominates the stage, his ebullience, and eloquence, the sheer joy he takes in his own superior intelligence making him both repellent and engaging. Watching him intellectually demolish his opponents in the forum sends chills up the spine. The intellectual brilliance of Cicero being brought to heel by the brute strength of Caesar and his cronies, the popularity campaigns masquerading as justice, the self-justifying moral ambivalence of loyalty to the state at any cost; all these things remain as urgent now as they were two thousand years ago.
It’s unfortunate then that the plays’ contemporary bite is their weak point. The heavy-handed references to Trump and Brexit fall flat and are played for laughs in a way that is tonally jarring with the rest of the production. The reflection and resonance of the events of the fall of the Republic to contemporary politics are so clear; having a character literally come on stage in a Trump wig diminishes rather than supports the power of the metaphor. Plus, it’s just such a cliche. The unfortunate Trump wig detracts from an interesting point: just how damn insular all these people are; unaware that their incestuous internecine power struggles affect half the world. When the great military general Pompey shows up, bragging that he has single-handedly doubled the size of the Empire and conquered a laundry list of countries, the attitude within Rome is a quick shake of the head and roll of the eyes, as if to say, “this guy.. what does he know of Rome?” Mike Poulton (who otherwise does a credible job in adapting the novels into something compelling and cohesive) chooses to exploit this to make a cheap joke about Syria (hey Ancient Rome is a metaphor for 21st century politics, geddit?) but loses the opportunity for a far more subtle and psychologically layered exploration of how the insularity of politics, the personal dick-swinging competitions between powerful men, can result in countries being vivisected and parcelled out like prizes in a birthday party game. 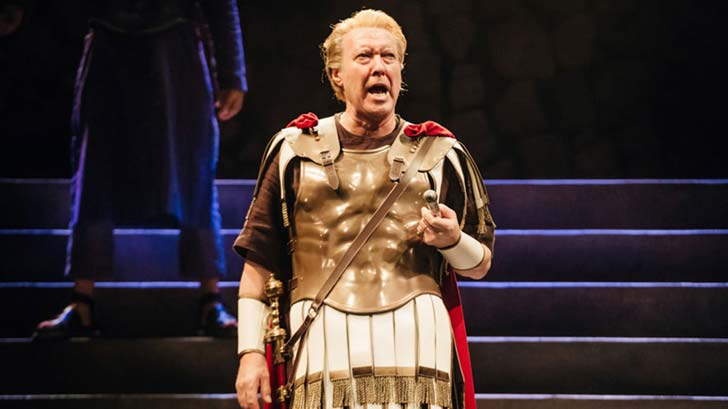 Cicero is a powerful and fascinating person but the strict insistence on staging a straight biography of his adult life means other, equally fascinating events are referenced but strangely not seen. An awesome military parade is promised and described in mouth-watering detail, then oddly passed over entirely. Mark Antony is established as a critical character, his story then cut off halfway through, his final years and death mentioned as a casual postscript.
These minor flaws do not detract from what is overall an ambitious and thoroughly enjoyable theatrical experience. I loved every minute of it.
Tickets for both parts of Imperium; Part I: Conspirator and Part II: Dictator can be purchased together or separately . The production ends on 8 September