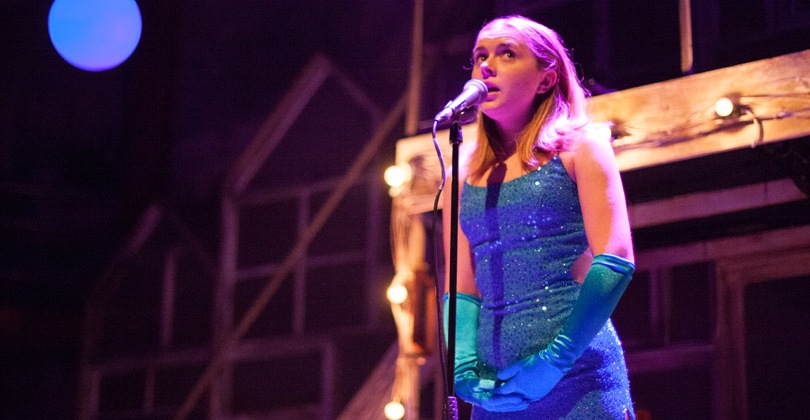 The revival of The Rise and Fall of Little Voice brings high expectations from an audience eager to see this British classic about a big talent in a small town. Hughe’s design places us in a modest working-class home, somewhere around the late 60’s/70’s. Fun was clearly had in many a vintage shop with more costume changes than Lady Gaga.  Whilst Little Voice hides upstairs in the escape of her old-time vinyl, extroverted mother Mari is desperate to connect with a world outside of her ordinary existence. The first step is a brand spanking new rotary pulse dial phone, (younger audiences may want to Wikipedia). Were this a contemporary setting, Mari would surely have a cack-handed attempt at an Instagram account, and LV would definitely not be on Facebook. George’s energy as Mari is commendable, as she moves the momentum ever forward with brash one-liners, taking the stage and completely winning the audience over with laughter. Best friend Sadie played by Monk has a showstopper of a boogie to Jackson 5 that is sublime. The dysfunctional relationships of Mari with her daughter, friend, and man, as well as the ‘ghost’ of her late husband through his old records,  crash through the first half, and when the sound of Hutchinson’s Little Voice is finally given space to break through it is a welcome relief.

In the second half, the fourth wall is lifted for a moment as the audience find themselves in Mr Boo’s club for LV’s first gig, and despite many of us know how it’s going to play out, there is an eager hush over an audience keen to hear Hutchinson’s powerfully stunning voice. The cast does well in portraying a journey full of laughter, and pain. However, it is with regret that I question Latter’s direction on certain aspects of the piece. Park 200 is a space in thrust, (audience on three sides), and it was unfortunate that a notable proportion of the Audience Left view consisted of George’s underwear. On occasion, this might have been a choice to put across Mari’s haphazardness, but I saw so much that I was left wondering if it really was character choice or an unfair oversight.  Also consistently undermining the cast’s strong performances were hurried scene changes in the blackout. Watching actors scramble off stage after a highly charged scene, and stage management moving props around kills the momentum. In a live medium such as theatre, where no one is invisible, (even when the lights are down), I urge any Director to find a way for scene changes to be as watchable as the rest of the play. Transitions should assist us into the next scene, not hinder it.

An affectionate revival of a popular tale, with a committed cast.