Belarus Free Theatre’s immersive adaptation of Counting Sheep, which made its debut at the Edinburgh Festival Fringe in 2017 as a ‘guerrilla folk opera’ about 2014Kiev Uprising. As Ukraine heads to the polls to vote in presidential elections, among suggestions of clone candidates Counting Sheep is a love story about musicians Marichka and Mark in a Ukraine where some want to join the European Union and others are keen to keep an alliance with Russia.

In these post-Brexit times it is easy to forget that too many nations the EU is seen as the light at the end of the tunnel, there is an eerie moment in Counting Sheep where Ukraine states that it cannot work alone, it needs an alliance. It isn’t hard to see why the Vault Festival chose this show to be its major immersive production in2019 after the more light-hearted Neverland (2018) and The Great Gatsby (2017 and still wowing audiences in a new venue two years later). Counting Sheep wears its politics on its sleeve without preaching.

There are three options. You can be an observer; watching the action unfold without any physical exhaustion or you can experience as I did, as a protester with all the music, dancing, weddings with an on-stage kiss that had me and my companion swooning, explosions, barricades, sandbags and death. As a protestor, you can either have the full premium experience for £41.50 which includes a light meal and vodka or for £30 you can get a light snack. Both the protestors experience the same show, which encourages audiences to take photos, make videos and get stuck in. It is a revolution after all. 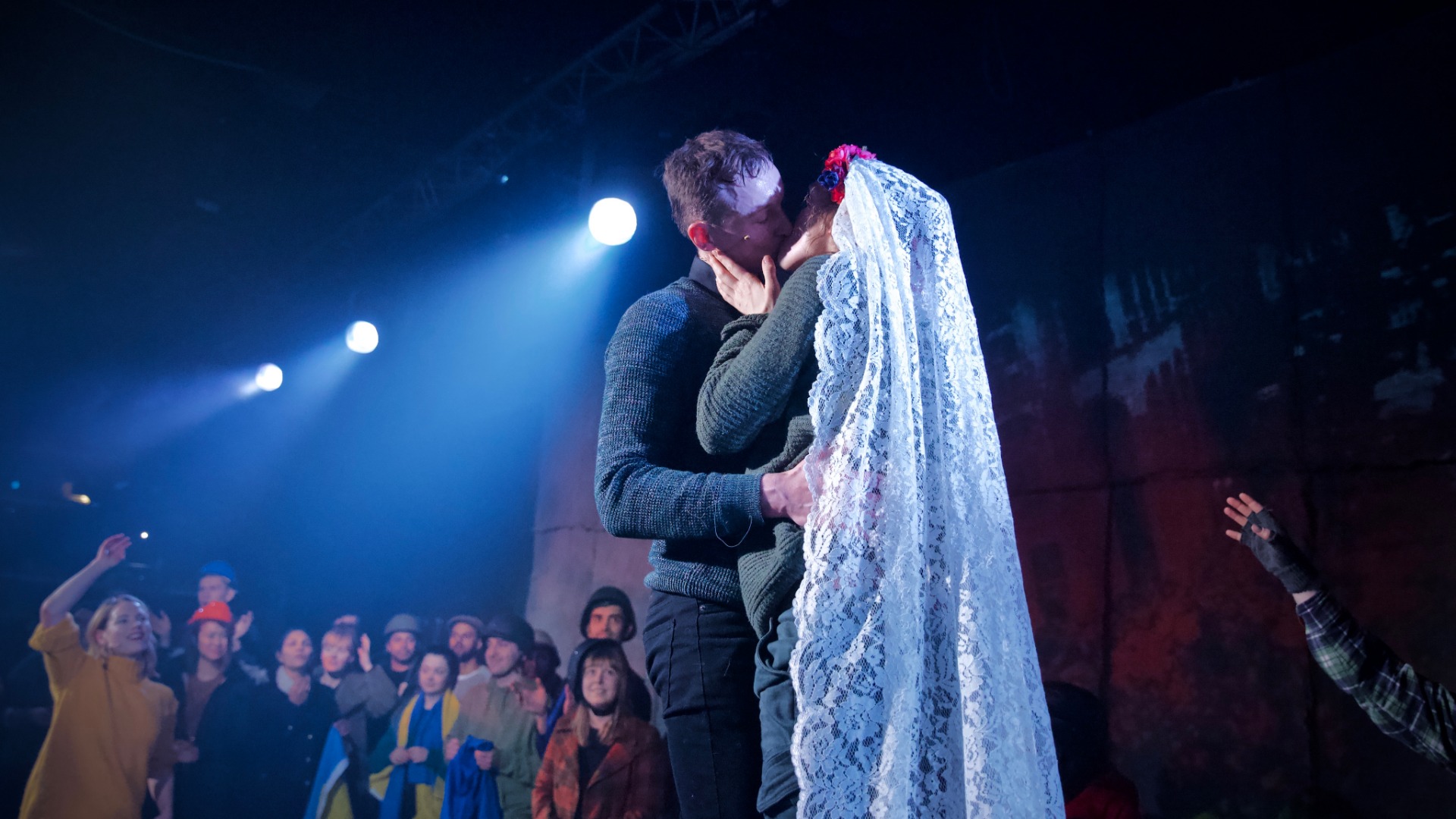 The scripted moments work incredibly well; Marichka talking about her childhood dream of a being a pianist playing a white piano, Mark, a young Canadian with Ukranian heritage who happens to find himself in Kiev when the revolution occurs and where he meets and falls in love with a pianist who finds herself in the revolution because all her concerts have been cancelled amongst the violence and chaos.

The show doesn’t hold back on the sense of chaos; weddings and intense romance amongst the violence because who knows if they will be alive the next day to meet someone else, creating barricades with bricks and (very heavy) sandbags, waltzing with your companion and rocking out to an electric violin version of Smells Like Teen Spirit.

The highlight for me was the music, not just atmospheric but providing a soundtrack to these people’s lives. The importance of Ukranian music, as Balaklava Blues electro-folk soundtrack aids to sense of urgency, from barricades to funeral marches  and thus Ukranian identity as it fights a war within itself as the nation grudgingly accept that it will need to pick a side but is also fighting to be Ukranian, to remain Ukranian amongst all the alliances and uncertainty.

In this adaptation Belarus Free Theatre have fought to keep the Ukranian identity amongst the interactivity and bring it to a new audience but it is a deeply emotional work (some Ukranian audience were in tears) and I felt guilty for having such a good time; Counting Sheep is a show that makes sense of conflict and much like the romance between Marichka and Mark finds the good in this story and provides a truly emotional, interactive and interesting story whether you lived through it or you are learning about this for the very first time.

Counting Sheep is on until 17 March https://vaultfestival.com/whats-on/counting-sheep/